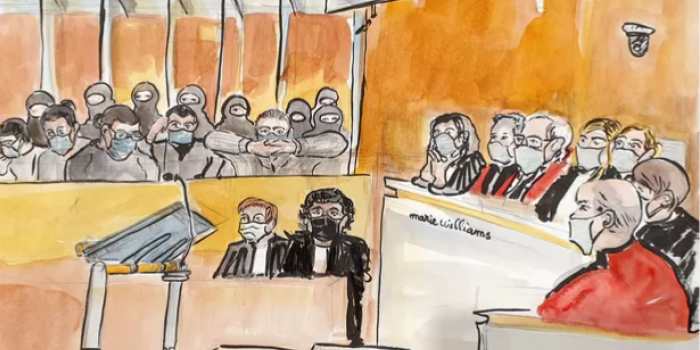 A French court on Wednesday convicted 14 people of crimes ranging from financing terrorism to membership of a criminal gang in relation to Islamist attacks in 2015 against the Charlie Hebdo satirical magazine and a Jewish supermarket, as Reuters reported.

Among the 14 was Hayat Boumeddiene, former partner of Amedy Coulibaly who murdered a policewoman and, a day later, four French Jews in the siege of a kosher supermarket in eastern Paris, as France 24 reported.

Boumeddiene was found guilty, as to Reuters, of financing terrorism and belonging to a criminal terrorist network. She is thought to be alive and on the run from an international arrest warrant in Syria, where she joined the Islamic State group.

Another of the three accomplices tried in absentia, Ali Riza Polat, a 35-year-old French-Turkish friend of Coulibaly's, whom prosecutors described as his "right-hand man", was also sentenced to 30 years in prison. Other sentences ranged upwards from four years.

The trial has reopened one of modern France’s darkest episodes, just as another wave of Islamist attacks on home soil this autumn, including the beheading of a schoolteacher, prompted the government to crack down on what it calls Islamist separatism.

A third attacker, Amedy Coulibaly, killed a police woman and then four Jewish hostages in a kosher supermarket in a Paris suburb. Like the Kouachis, Coulibaly was killed in a shootout with police.

Among the 14 accomplices sentenced on Wednesday was Hayat Boumeddiene, the former partner of Coulibaly and one of three defendants tried in absentia. Believed to be still alive and on the run from an international arrest warrant, prosecutors referred to her as an “Islamic State princess”.

The judges convicted Boumeddiene, 32, of financing terrorism and belonging to a criminal terrorist network, and sentenced her to 30 years in jail.

The attacks, claimed by al Qaeda and Islamic State, laid bare France’s struggle to counter the threat of militants brought up in the country and of foreign jihadists.

“The fact of choosing victims precisely because they were journalists, or a member of the security forces, or of Jewish faith, clearly demonstrates in itself their desire to sow terror in Western countries,” the presiding judge told the court.

Terrorism-related charges were dropped for six of the defendants who were found guilty of lesser crimes.

Journalists from Charlie Hebo testified during the trial.

After Wednesday’s ruling, the magazine’s lawyer, Richard Malka, described the defendants as part of a nebulous support network that enabled the attackers to spill blood.

“Without these nebulous networks, attacks cannot occur,” he told reporters, in the first reaction from the magazine or its representatives to the verdicts.

On the eve of the trial’s opening, Charlie Hebdo, which has long tested the limits of what society will accept in the name of free speech, re-printed the cartoons that had stirred outrage in the Muslim world when they were first published by a Danish paper in 2005.

A month later, history teacher Samuel Paty was decapitated by a teenage Islamist who said in a recorded message that he was avenging Paty’s use of the cartoons in a class on civil liberties.