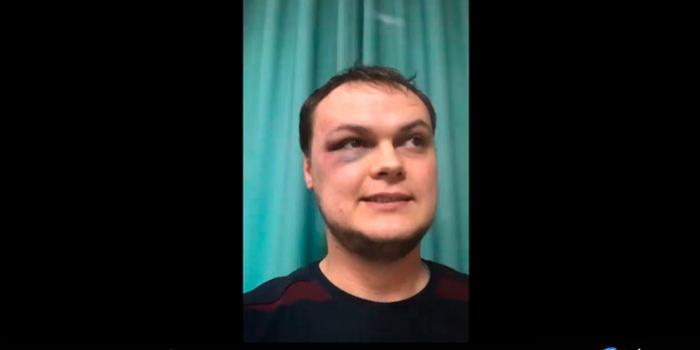 In Kharkiv, on the night of May 1st, some unknown persons beat a freelancer, cybersecurity expert Mykyta Knysh, as he was filming a story about lockdown. Mykyta Knysh told it on May 1 on his Facebook.

As Knysh said, on his was home, he decided to take footage of some “golden boys” who ignored self-isolation rules and gathered under shopping mall.

“They beat me for having shot a story about non-compliance with self-isolation terms. I was shooting a story on violation of lockdown. Not far from my house, next to the commercial center Antoshka’s parking some “gilded youth” is used to meet, they open the trunks of their cars, smoke hookahs, hang out together, this party sometimes can last until three or four in the morning, "he said.

The journalist called the police just to look at its reaction, whether they would fine someone or warn someone. But the police, he said, "defiantly left the place." When the police left, they immediately attacked the freelancer.

“Exactly 5-15 seconds after the cops left the scene, I was attacked, my phone was taken, my backpack with a laptop as well. The person who picked up my phone threw it away. And he brought the laptop and the backpack with my other belongings aside, ” Knysh said.

After the attack, he called the police again and an investigative unit arrived, they recorded my complaint.

“I took pictures of my injuries: my face suffered a bit and a couple of bruises on my body. One can not say that I am very upset or beaten,  I will survive. Globally, this story shows that lockdown is a complete profanity, nobody punishes anyone, ” Knysh said.

As Knysh wrote on Censor.net , his main specialization was cyber security, but he was author of columns and blogs in a number of media outlets. His columns can be read on Ukraynska Pravda, Economicna Pravda and he has a blog on Censor.Net.

He added that he did not work as a full-time journalist, but as freelance journalists for Kharkov media outlets  2day.kh.ua and news agency Informbureau.

"In a situation where the police can not cope with lockdown control, I consider it is my fundamental civic duty to deal with this issue on my own and to cover it," he wrote.

The Police of Kharkiv region opened proceedings for robbery and threat or violence against journalist.