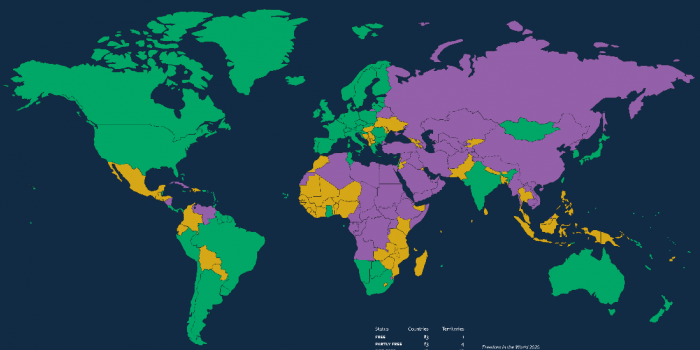 Photo credit: freedomhouse.org
Last year's score of Ukraine in the "Freedom in the world" ranking has improved by several points compared to 2018, as Ukrinform reported.

At the same time, this status does not reflect conditions in Crimea and Eastern Donbas occupied by Russia, Freedom House informs.

Ukraine remains in the category of "partly free" countries. Its score has slightly increased compared to the 2018 report. Now Ukraine has 62 points out of possible 100 (worst possible score is 0), up two points compared to the previous period.

“Ukraine has enacted a number of positive reforms since the protest-driven ouster of President Viktor Yanukovych in 2014. However, corruption remains endemic, and initiatives to combat it are only partially implemented,” reads the report.

As noted, the attacks against journalists, civil society activists, and members of minority groups are frequent, and police responses are often inadequate. Russia occupies the autonomous Ukrainian region of Crimea, which it invaded in the aftermath of Yanukovych’s ouster, and its military supports armed separatists in the eastern Donbas area.

According to the human rights activists, the key developments in Ukraine in 2019 were the presidential and parliamentary elections generally recognized as "competitive and fair." Freedom House also praised the launch of long-awaited reform by the new government. Another important point, according to experts, is the start of operations of the new High Anti-Corruption Court, although it had not produced any convictions at year’s end.

The reports on the occupied Crimea and Eastern Donbas were published separately. Human rights defenders identified these territories as "not free."