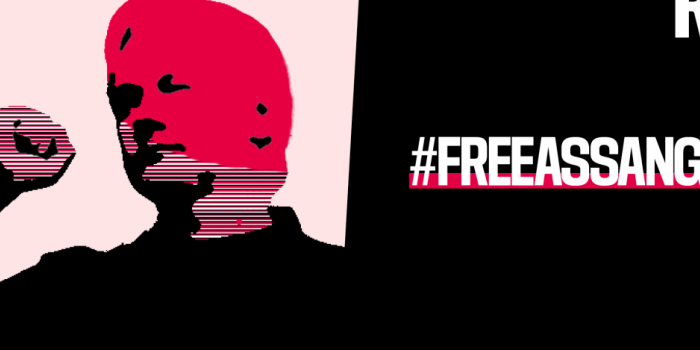 Photo credit: RSF
Reporters sans frontières (RSF) calls to sign petition against extradition of Julian Assange to United States.
Petition is as follows:
"Reporters Without Borders (RSF) is firmly opposed to the possible extradition of Julian Assange to the United States, where he could be sentenced to up to 175 years in prison for charges that include publishing and providing journalists with information that served the public interest.

UPDATE: The US extradition hearing against Julian Assange will resume on 7 September at the Central Criminal Court in London. We will be delivering this petition to the UK authorities that morning. Help us reach our goal of 100,000 signatures by signing and sharing!

The Trump Administration’s use of the Espionage Act could lead to Assange’s conviction and a sentence of up to 175 years in prison. This would set a dangerous precedent for all journalists who publish classified information that is of public interest.

In retaliation for his role facilitating major revelations in the international media about the way the United States conducted its wars, Assange is facing 18 charges in the US, including 17 under the Espionage Act. A UK court will consider the US extradition request starting on 24 February.

Assange’s alleged crimes date back to 2010, when the organisation he founded, WikiLeaks, transmitted documents to media outlets including Le Monde, The Guardian and The New York Times.

The documents, which were provided to WikiLeaks by whistleblower Chelsea Manning,  included 250,000 US diplomatic cables and thousands of mostly classified internal US army reports about military operations in Iraq and Afghanistan. Their disclosure exposed cases of torture, abduction and disappearances*.

The publication of these documents by media outlets was clearly in the public interest, and not an act of espionage. Julian Assange’s contribution to journalism is undeniable.

Assange sought refuge in the Ecuadorian Embassy in London for seven years, but, as a result of a change of government in Ecuador, he was released to UK authorities and arrested on 11 April 2019.

RSF urges the UK government to prioritise the principles of freedom of expression and the defence of journalism in its treatment of Assange, and to act in accordance with UK law and the country’s international human rights obligations.

RSF is concerned about Assange’s health. After visiting him in London’s Belmarsh prison on 9 May, UN special rapporteur Nils Melzer reported that Assange had been deliberately exposed to inhuman and degrading treatment that could be described as psychological torture.

Every day, news organisations rely on and publish classified information to serve the public interest. If the legal persecution of Assange continues, investigative journalism and press freedom will be the victims.

As a matter of urgency, please sign this petition calling for the United Kingdom not to comply with the United States’ request to extradite Julian Assange. Share this appeal using the #FreeAssange hashtag!

*The “Collateral Murder” video published by WikiLeaks revealed that Reuters reporter Namir Noor-Eldeen and his driver and assistant Saeed Chmagh were killed in Baghdad on 12 July 2007 by shots fired from a US helicopter.