Fox news cuts away from McEnany press conference: ‘I can’t in good countenance continue showing this’ - The Independent 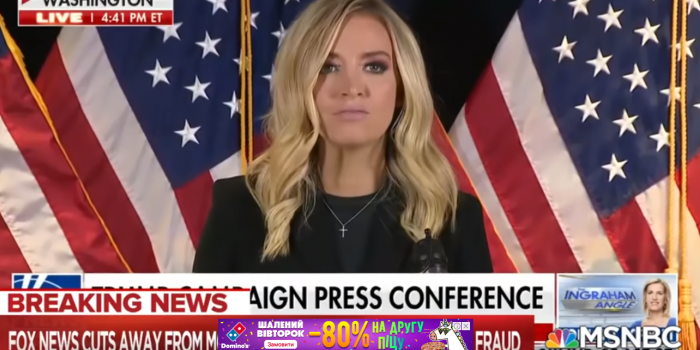 Fox News cut away from a Trump campaign press conference outlining its allegations of so-called voting fraud in the presidential election, as The Independent reported..

“Whoa, whoa, whoa. I just think we have to be very clear: she's charging the other side as welcoming fraud and illegal voting, unless she has more details to back that up, I can't in good countenance continue to show you this," Cavuto said.
Ms McEnany began the press conference saying the Democrats were the only party opposing voter ID, verifying signatures, citizenship, residency, eligibility, and trying to keep observers out of the count room.
“You take these positions because you are welcoming fraud and you are welcoming illegal voting,” Ms McEnany said just before Fox News cut away.
Mr Cavuto said they would return to the press conference if they presented evidence to substantiate the claims.

“But that’s an explosive charge to make, that the other side is effectively rigging and cheating, if she does bring proof of that of course we’ll take you back so far she has started saying, right at the outset, welcoming fraud, welcoming illegal voting,” Mr Cavuto said.

When asked for specific evidence that showed illegal votes were cast, GOP chairwoman Ronna McDaniel pointed to a whistleblower complaint from a City of Detroit election worker that alleged back-dating of ballots in Michigan.

“We will have to subpoena that and we’ll have to get that information but that’s going to be an investigation process. But somebody was told ‘you need to backdate ballots to make them legal’, ballots that were illegal under the law,” Ms McDaniel said.

In Pennsylvania, meanwhile, Trump campaign general counsel Matthew Morgan said they have filed two lawsuits with the US District Court against the secretary of state alleging violation of equal access and equal protection.

The allegation is that voters in Democrat counties like Philadelphia were allowed to work outside the bounds of restrictions on fixing defective ballots, known as “curing”, while voters in Republican counties of Pennsylvania were not.

Mr Morgan also alleged there were 682,000 ballots tabulated outside the view of Republican observers while Democrats were given access to view the vote counts.No specific evidence in support of the allegations was presented at the press conference.