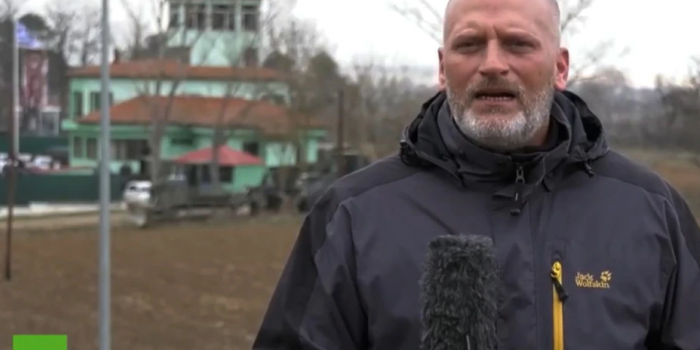 A German journalist who used to work for Russia's state-controlled television channel RT says he was asked by his employer to spy on Kremlin critic Aleksei Navalny while he was undergoing treatment in Germany after being poisoned in Siberia, as Radio Free Europe/Radio Liberty reported.

Daniel Lange has described to German media how he was instructed to use his journalistic credentials to test how close he could get to the ward where Navalny was recovering in Berlin's Charite hospital and "carefully take photos of the extensive military presence" at the medical facility.

Lange told RFE/RL on March 11 that his assignment "had no journalistic connotation" and eventually prompted him to break his contract with RT Deutsch -- the German branch of the state-controlled outlet.

Lange has said that he and a colleague were tasked with testing how far they could get inside the Charite building, how many “checkpoints” they could cross undetected, and how close they could get to Navalny in the intensive care unit without being noticed.

"I told them several times that I was not a secret agent and asked what would they do to me in Russia if I secretly took a picture of a soldier in front of a military hospital," Lange told RFE/RL.

Lange says that he deliberately drew attention to himself while at the hospital, telling the police there that he was a journalist with "RT from Russia." He says he was then given another assignment: keeping an eye on Navalny’s chief of staff Leonid Volkov and Navalny's head of investigations, Maria Pevchikh.

"Finding Volkov's whereabouts from a photo of his apartment was an absurdity, devoid of journalistic meaning," Lange told RFE/RL. "Volkov did not hide in Berlin and gave interviews. If you wanted to interview him, you would make a formal request."

Lange also told RFE/RL that he and his cameraman were instructed by the outlet's new management to "show all the dirt of Germany."

"I was instructed to select only those images that show Germany from the wrong side," he said. "That's when I decided to leave, and also to report what was happening behind the scenes."

RT said on March 10 that it intends to sue the German tabloid Bild, where Lange first made his allegations.

Announcing its lawsuit against Bild, RT hinted that the allegations could be part of a campaign against the Russian television network in Germany.

Lange this week published a book -- titled Inside RT Deutsch: Putin’s Media Army In Germany -- in which he recalls his two years of working for the outlet. The book includes the story about RT’s alleged attempt to spy on Navalny.

The Kremlin critic was arrested on January 17 upon his return to Russia from Germany, where he received life-saving treatment from a nerve-agent poisoning while traveling in Siberia in August.

Navalny has insisted that his poisoning was ordered directly by Russian President Vladimir Putin. The FSB security service and the Kremlin have denied any role in the poisoning.

Last month, a Moscow court ruled that, while in Germany, Navalny had violated the terms of parole from an old embezzlement case that is widely considered to be politically motivated. Navalny's 3 1/2-year suspended sentence from the case was converted to a jail term, though the court said he will serve 2 1/2 years in prison given time already served in detention.