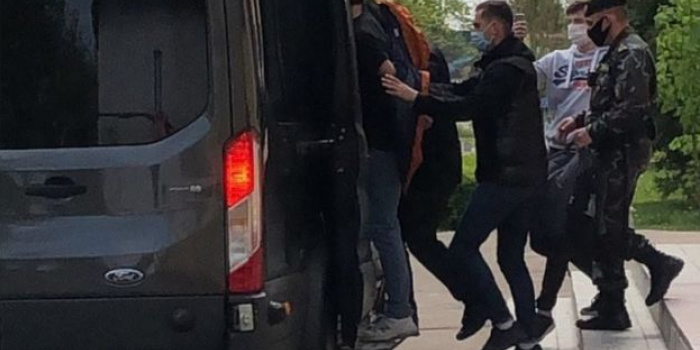 Reporters Without Borders (RSF) condemns the arrests of five independent journalists in the space of two days in Belarus in connection with their coverage of rallies organized by an opposition candidate for president. The international community should press Belarus to guarantee media freedom in the run-up to the election, RSF said.

At hearings held on 11 and 12 May, four of the journalists were given sentences ranging from 10 to 21 days in prison for "participating in an unauthorized demonstration." The fifth was released after being held a few hours.

Three of the journalists – Zmitser Lupach, a reporter for Belsat TV (which broadcasts from neighbouring Poland), and freelancers Mikhail Arshynski and Alyaksandr Burakou – were arrested on 8 May after covering events organized by Siarhei Tikhanouski, an outspoken blogger who has just announced he is running for president in the August election.

Lupach, who was also fined the equivalent of 460 euros on a charge of working without accreditation, was rushed to hospital with severely elevated blood pressure after his hearing.

The fourth detained journalist, Ales Asiptsou, a reporter for the BelaPAN news agency, was arrested on 9 May after covering an “anti-parade” that Tikhanouski staged in the eastern city of Babruysk as an alternative to the official parade marking the Soviet victory against the Nazi armed forces in 1945. He has been on hunger strike since his arrest.

As Belsat TV reporter Alyaksandr Barazenka was on his way to film the “anti-parade” in Babruysk, he was stopped by traffic police on the grounds of a problem with his licence plate and was detained for three hours. He said his mobile phone stopped working all the time that he was detained.

"This targeted harassment in the run-up to the presidential election clearly aims to intimidate journalists and obstruct coverage of opposition activity in Belarus," said Jeanne Cavelier, the head of RSF's Eastern Europe and Central Asia desk. "These convictions disregard article 34 of the Belarusian media law, which allows reporters to cover public events. There is no justification for jailing these journalists. Their convictions must be overturned and the basic right to inform must be respected."

The human rights group Viasna has meanwhile reported that at least 120 people were arrested or charged after protests in several cities to demand the release of Tikhanouski, who is now serving a sentence of 15 days of administrative detention.

Ruled since 1994 by President Alexander Lukashenko, who has been reelected in the first round every five years, Belarus is ranked 153rd out of 180 countries in RSF's 2020 World Press Freedom Index.

Until October 27: accreditation for conference on Ukraine's implementation of ECHR decisions

"Avers" refuted inaccurate information upon court decision
Blogs
Sanctions against Medvedchuk’s TV channels. The first estimates
Do you want to be first to learn about the new research of the Institute of Mass Information? Subscribe to the newsletter!