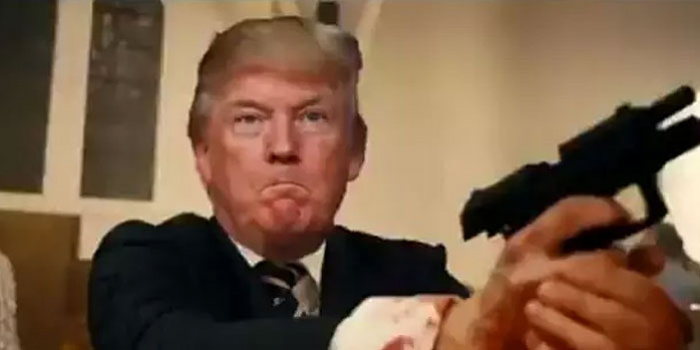 A disturbing video of a fake President Donald Trump shooting, assaulting and stabbing his critics and the media was played at a conference held by a pro-Trump group at his Miami resort last week, according to footage obtained by The New York Times.

The video, which was shown at Trump's National Doral Miami during a three-day conference held by American Priority, includes the logo for Trump's 2020 reelection bid and showcases a series of internet memes, the Times reported. One part of the video, the Times said, shows a fake Trump's head edited onto the body of a man opening fire in the "Church of Fake News" on a group whose faces were edited to appear as a group of Trump critics and news organizations, as CNN reported.
According to the Times, the clip ends with Trump driving a stake into the head of a person who has the CNN logo for a face before standing and smiling as he looks around. The clip appears to be edited from a church massacre scene in the 2014 movie "Kingsman: The Secret Service," the Times reported.
CNN cannot independently verify the video as of Sunday night and has not shared contents of it. CNN has confirmed the video was played at the conference and not in the main ballroom.
"Sadly, this is not the first time that supporters of the President have promoted violence against the media in a video they apparently find entertaining -- but it is by far and away the worst. The images depicted are vile and horrific," CNN said in a statement Sunday night. "The President and his family, the White House, and the Trump campaign need to denounce it immediately in the strongest possible terms. Anything less equates to a tacit endorsement of violence and should not be tolerated by anyone."
The organizer for the conference said in a statement posted on American Priority's website that "an unauthorized video was shown in a side room" at the festival, but that "this video was not approved, seen, or sanctioned" by the festival's organizers.
"AMPFest19 always has and always will condemn political violence," Alex Phillips, organizer of the event, said in the statement. The statement did not indicate who was responsible for showing the video. The statement did not indicate who was responsible for producing or showing the video.
White House press secretary Stephanie Grisham said in a statement Monday morning on Twitter that the President had not seen the video but would "shortly." Grisham said that "based on everything [Trump] has heard, he strongly condemns this video."
Tim Murtaugh, a spokesman for Trump's campaign, told the Times he didn't know anything about the video. "That video was not produced by the campaign, and we do not condone violence," he said.
Phillips, the organizer for the event, said in a statement to the Times on Sunday that the clip was played at the conference as part of a "meme exhibit."
"Content was submitted by third parties and was not associated with or endorsed by the conference in any official capacity," Phillips said. "American Priority rejects all political violence and aims to promote a healthy dialogue about the preservation of free speech. This matter is under review."
Former White House press secretary Sarah Sanders and the President's son Donald Trump Jr. were scheduled to speak at the conference, the Times said. Sanders told the newspaper she did not see the video and a person close to Trump Jr. told the Times that he did not see it either.
"I was there to speak at a prayer breakfast, where I spoke about unity and bringing the country together," Sanders told the Times. "I wasn't aware of any video, nor do I support violence of any kind against anyone."
The White House Correspondents' Association weighed in on the video Sunday night, saying, "All Americans should condemn this depiction of violence directed toward journalists."
"The WHCA is horrified by a video reportedly shown over the weekend at a political conference organized by the President's supporters at the Trump National Doral in Miami. All Americans should condemn this depiction of violence directed toward journalists and the President's political opponents," said Jonathan Karl, president of the association. "We have previously told the President his rhetoric could incite violence. Now we call on him and everybody associated with this conference to denounce this video and affirm that violence has no place in our society."
CNN
Liked the article?
Help us be even more cool!
Other news