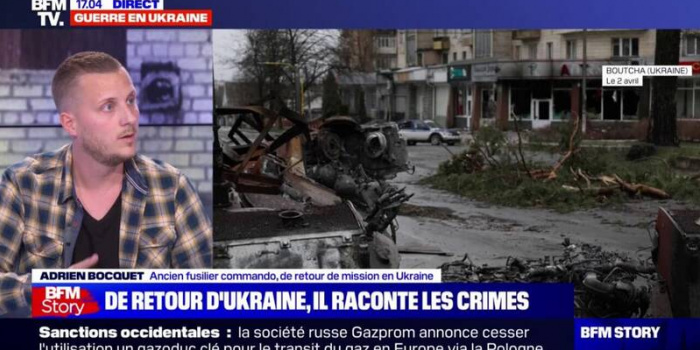 In France, ex-military Adrien Bocquet who, in his numerous interviews with the media, spoke about the tortures which the Ukrainian army allegedly committed and which he had allegedly witnessed, but provided no factual verification to his words, was exposed.

Bocquet's stories have been fact-checked by CheckNews, which is part of the French Liberation, European Pravda reports.

Bocquet's various speeches have been broadcast en masse in France and around the world for several days. He said that he had returned after his stay in Ukraine and was exposing the war crimes he had allegedly witnessed. He claimed that these actions were committed by the Ukrainian military, in particular the Azov fighters. This is a narrative that is being actively spread by moscow and pro-russian TV channels.

However, CheckNews has collected numerous facts that contradict Bocquet's stories about his stay in Ukraine.

Bocquet has repeatedly stated that he had witnessed war crimes committed by the Ukrainian armed forces, or rather by "Azov." The former Air Force serviceman described numerous scenes that he said had taken place around the city of Bucha, known for the massacres of civilians committed by russian troops there. Namely, Bocquet said that members of Azov, with whom he allegedly had been, had been systematically shooting at the feet of the captured russian soldiers. After that, moscow officers had been executed in front of him.

However, none of the photos that the journalists were able to see confirm that he has been to Bucha, or even that he has often visited the Azov Battalion or others. No photo shows him communicating with the soldiers or even standing next to them, although otherwise Adrien Bocquet actively photographs the checkpoints he crosses.

CheckNews was able to obtain Adrien Bocquet's entry and exit dates for Ukraine. According to Ukrainian border guards, Bocquet first entered the village of Shehyni on April 4 and left on the same day from the same place. His second crossing, on April 5, happened at the same border post, and he left on April 6 to travel back and forth again in one day.

The next time he returned to Ukraine was more than a week later – on April 17, – entering through Krakivets, about 20 kilometers north along the Polish border. He stayed in Ukraine until April 19, and then left through Shehyni, and this was his longest stay (less than 72 hours). His last entry, again across the Polish border, was between April 19 and 20.

And during his longest stay in Ukraine, less than 72 hours from April 17 to 19, he explained that he had witnessed the shelling in Lviv on April 18, which makes it impossible for him to have travelled back and forth (unlikely under such conditions) to Bucha. There were no battles in Bucha during his stay.

CheckNews notes that Adrien Bocquet already had a dubious reputation before telling this amazing Ukrainian story. If he is indeed the former soldier that he describes (the Ministry of the Armed Forces confirms that "Mr. Bocquet, a former commando shooter, was wounded during a drill"), he is remembered by his comrades-in-arms as a big bastard. CheckNews spoke to a soldier who was at the same air base as Adrien Bocquet in 2012 after his crash. "I didn't know him for long, but he has lied a lot in the short time that I talked to him. The base is a town where everyone knows one another. We often met in the evening in the base's [cafeteria], where I met him. He began to tell me that he was a shooting instructor for officers, which surprised me. It turned out that he had told another guy in the cafeteria that he was from the Intelligence and Security Department of the Ministry of Defense, which is nothing similar to a shooting instructor. He pretended to be James Bond, Daniel Craig."

In his book, Adrien Bocquet explains that at the time he used to be an aviation warehouse keeper, as evidenced by the information obtained by CheckNews. According to a serviceman who knew him, the latter was then called Paul Mahieu – a pseudonym that can be found in his Facebook account URL. "The Air Force Gendarmerie searched for Paul Mahieu [in the files], finding nothing. Eventually, they saw that his panel was marked with the name Bocquet, searched for this name, and told us that he could not be trusted, warning that he was a liar. That's why we stopped communicating with him."