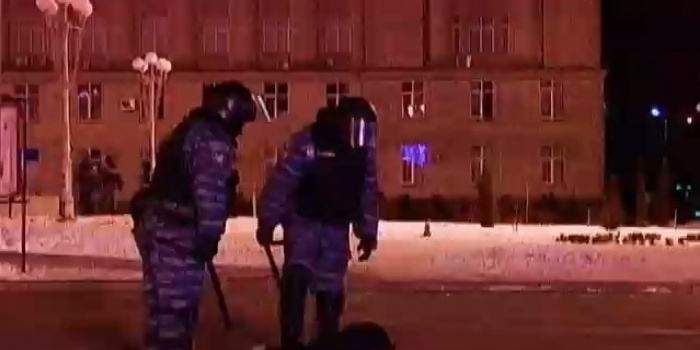 The Sosnivsky District Court of Cherkasy sentenced the ex-commander of the Berkut special police battalion in the Luhansk region to four years in prison.

This decision was issued on June 23, as to the website of the Cherkasy region prosecutor's office.

According to the prosecutor's office, on January 27, 2014, in Soborna Square in Cherkasy, the accused ordered subordinates to use some riot control weapons and detained peaceful protesters, failed to ensure the personal inviolability of detainees and hampered the journalistic lawful activities.

The court also deprived the accused of the right to hold positions in law enforcement agencies for a period of three years.

Ex- Berkut officer had fled to the temporarily occupied territory of Luhansk region and holds now a leading position in the so-called "Ministry of Internal Affairs of Luhansk People's Republic".

According to the Bar Advisory Group, the sentence was passed against the commander of Luhansk's Berkut, Valery Kostenko.

Kostenko had used force against an activist Oleh Sobchenko and a special correspondent of the Inter TV channel Stanislav Kukharchuk.

They are happy that the case has reached a verdict, but found that the punishment could have been more serious.

Stanislav Kukharchuk believes that this sentence and the incriminating articles do not correspond to the actions of the Berkuts that night.

"I'm happy that there is at least some sentence, because this torment was on for almost eight years. But one had to see what was happening there. It was just a hell, when people with broken heads were taken in bunches to the city hospital. How they were abused (in custody). It is not even an abuse of power by the same commander of Luhansk "Berkut", it is simply sadism. Even on my example when they beat and beat to death people who were already lying. I didn't resist. I told the Berkut” officer that I was a journalist and I did not resist. I am to lie on the ground. I showed my press card. But when I lay down on the ground, they just started hitting me in the head. I think that four years is not enough, "the journalist said.

Oleg Sobchenko: "The sentence is quite ok, it would be possible more, well, victims always want it".

The representative of the victims, Yevhenia Zakrevska, agreed with Kukharchuk. "At the beginning of the trial, we insisted on some additional qualifications : torture and countering peaceful assemblies. But the indictment was not changed," she said.

As IMI reported, on January 27, 2014 in Cherkasy when breaking up a rally near the building of the regional state administration, the Berkut brutally beat the journalist of the "Inter" channel Stanislav Kukharchuk. The journalist showed his press card to the officer of Berkut special unit, but this one knocked him to the ground with a truncheon, after which several fighters struck the already lying Kukharchuk.

Stanislav Kukharchuk said that he was beaten despite he told to be a journalist.