EU condemned persecution of journalists and law defenders in Belarus 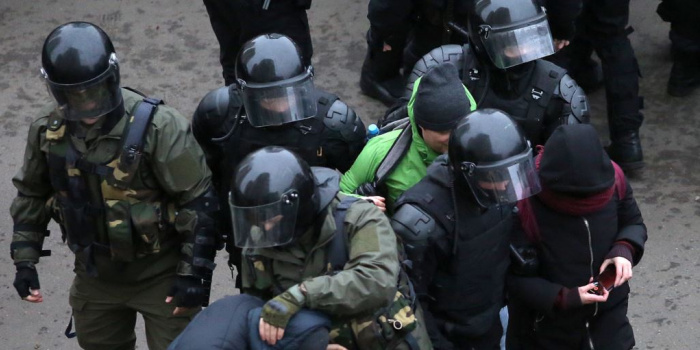 The European Union has condemned the persecution of journalists and human rights defenders in Belarus. Peter Stano, EU Spokesperson for Foreign Affairs and Security Policy said it commenting on the raids to Deutsche Welle.

Crackdown and attacks on civil society activists, human rights defenders and journalists are intensified, which is considered by EU as a "complete violation of their fundamental freedoms, human rights and the rule of law."

The government has come down hard on independent media during the anti-government protests.

Belarus canceled all accreditation for foreign journalists in October 2020 in response to EU sanctions.

Police detained journalists a total of 477 times last year, according to the BAJ.

Two journalists were due in court Tuesday on charges of organizing and preparing protests. The charges can carry a maximum penalty of three years in prison.

Peter Stano said that the continued law-enforcement crackdown "is unacceptable. Hundreds of politically motivated trials have taken place. Belarusians have been denied the most basic rights, including the right to fair trial and the right to humane treatment in custody," Stano continued.

Harassment through searches, arrests and criminal prosecution of journalists and human rights defenders, including Council of Europe (CoE) and UN partners is unacceptable, tweeted the CoE's Commissioner for Human Rights Dunja Mijatovic.

"Freedoms of expression, association and assembly should be ensured according to international human rights standards," she added.

“Hundreds of documented cases of torture have been collected to date”, and hundreds of politically motivated trials have been held, the statement reads.

Responding to government actions, the EU has imposed sanctions against 84 individuals and 7 entities responsible for the on-going repression and intimidation of peaceful demonstrators, opposition members and journalists, as well as for misconduct of the electoral process, related Stano.

Though further sanctions could be adopted, "the EU firmly believes that only democracy, the rule of law and conducting free and fair elections in respect of the democratic will of the people of Belarus is the only way forward," said Stano. Only this "will guarantee the long-term stability and sovereignty of Belarus," he continued.

It should be recalled, in October 2020, the European Union imposed sanctions on 40 officials from Belarus for election fraud and repression of protesters. In November, the EU expanded the list to include Alexander Lukashenko and 14 others. On December 17, the EU Council approved the next extension of sanctions against the Lukashenko regime - visa and property bans on another 29 individuals - as well as for the first time against a number of businesses.

As IMI reported, on February 16 in Minsk (Belarus), security forces searched members of the Belarusian Association of Journalists (BAJ). Journalists and human rights activists were also searched in a number of Belarusian cities.

On February 16, Ukrainian NGOs called on the Ukrainian authorities to publicly condemn the Belarusian authorities' repression and political pressure on human rights defenders and independent journalists.