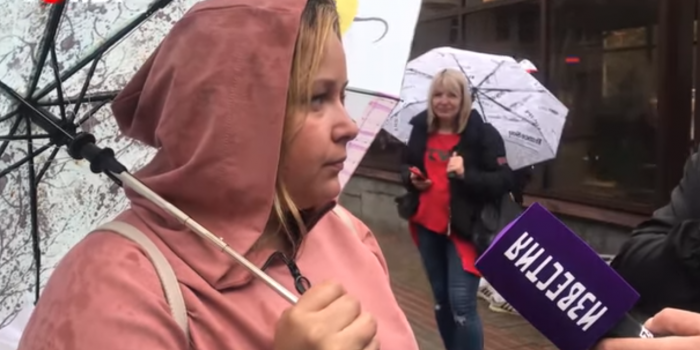 Employees of the state-owned Belteleradiocompany, who supported the protests, are being replaced by employees of the Russian propaganda channel RT (Russia Today),as Radio Liberty Beluarussian service reported.

Belteleradiocompany employees who supported the protesters are not allowed to get in the company's building. According to the interlocutor, Russian specialists - directors, technical staff, cinematographers came to the studio. They were shown how the equipment worked.

According to the edition, these are former and actual employees of the Russian international multilingual channel Russia Today and freelancers.

Passers-by on the approach to Belteleradiocompany are checked at four control points with policemen. Onlythose ones who dispose of the company permit are let in. The correspondent for Radio Liberty was not allowed to enter the building.

Daryna Vaytovych, employee of the company, said that she was deprived of a pass to the company's building, as well as some other employees who joined the strike and protest.

"The guards have lists of strike participants, and they take away the passes, now we are not even allowed to approach the house," she said.

Belteleradiocompany director Alyona Martynovska, who told TUT.by about it, was also not banned from entering the building. She supposed it would be due to a collective appeal to the leadership, which she had signed. The girl also told about Russian specialists who now work in the company.

"Yesterday afternoon, about six people came to speak to our video engineers," one employee who was on strike as well said. - They were interested in the work of our editing unit. The managers spoke aloud that they were Russians who came to work from Moscow. According to our guys, the Russians will have a social package and a salary of 5 thousand rubles. I explain, Belarusian specialists earn from one thousand to one and a half thousand rubles for this work. "

As IMI reported, on August 17 in Minsk, Belteleradiocompany employees went on strike near the office building.

Prior to that, they signed a statement addressed to the head of the company Ivan Eismont. In it, they demanded to invalidate the election results, to dismiss the head of the Central Election Commission Lidia Yermoshina, to release political prisoners, and to abolish censorship in the media.