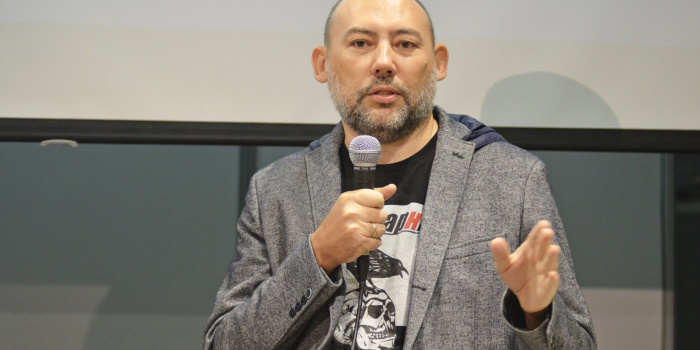 Dmytro Lykhoviy, editor-in-chief of Novynarnya, has been threatened after publication of a letter from a "political adviser" who allegedly offered to pay for non-publishing of some negative report on a MP from “Servant of the People” and some efforts to recover the good name already tarnished by some publication. In the next letter, the "political adviser" hinted to the journalist that he "could be found out driven in the trunk" and that Likhovy "will have to ride in a dollar-van." This was reported on the website of Novynarnya.

"I take it as a threat. For example, the threat to arson my car, and I will file complaint on it with the police, "- said Dmitry Lykhoviy.

The day before, on August 30, Likhoviy reported on Facebook that the Novynarnya editorial office had received a letter from an unknown person, signed as Ihor Khomenko. He said to be a "political advisor and thought leader of image management," who was authorized by an anonymous client to recover the good name of Yuri Aristov, chairman of the Verkhovna Rada's Budget Committee (People's Servant faction), and his son Artem after derogatory information published in Internet.

“There is a smear campaign on my client, ordered by some unpatriotic forces from abroad. The digital footprint leads to Russia. Actions require a tough response. So, we are interested to pay for blockage of negative coverage (i.e. non-publication of any negative story) on Yuri Aristov and Artem Aristov till the end of 2021. As well as the taking down of any negative text published after 2019, ”the letter reads.

“Can we work together well? The project is fecund. If you get, what I am talking about… I am waiting for a contact person to communicate with me, ”the authour of the letter said.

"After this awkward style of this letter, I would assume that “the PR thought leader” Ihor Khomenko does not really exist, especially since his FB is empty. And that all this is a kind of hustle and provocation. But the Ockham's razor does extist, as well as the current professional and honest-to-goodness government. That's why I don't exclude any scenario, ”said the editor in chief. 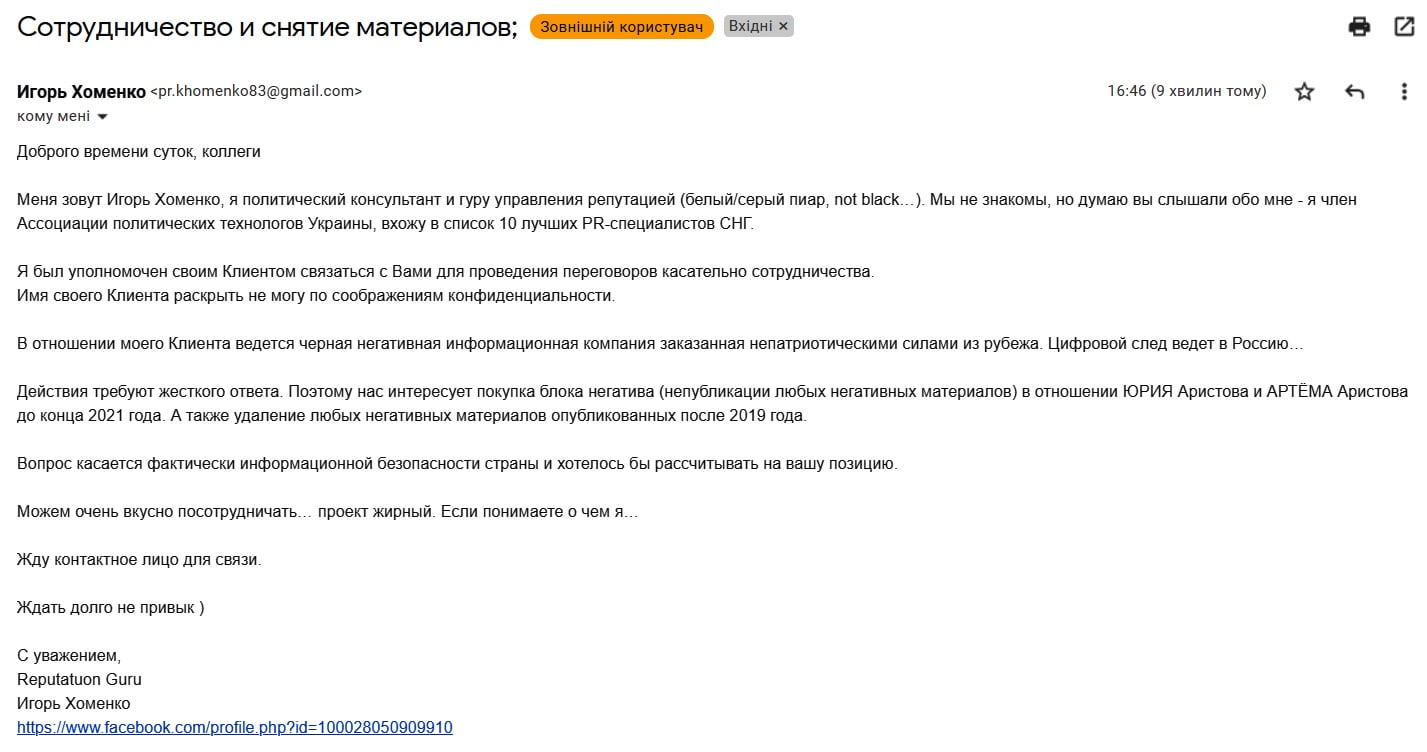 Commenting on the shared screenshot, Lykhoviy also reminded that the letter came on a day when a scandal broke out in the media about an accident involving MP from the "Servant of the People" OleksandEr Trukhin and taking down of the story by some media.

Novynarnya noted that Trukhin was a deputy of his fellow party member Aristov in the Budget Committee of the Parliament. Also, the edition noted that the proposal "Ihor Khomenko" came a few days after the publication in some media saying that the company related to Yuriy Aristov allegedly doing business with Russian companies.

The next day, August 31, the editorial office received a second letter from Ihor Khomenko.

"I'll tell you straight - I don't care about your post. As an experienced technologist, I anticipated this scenario and anticipated your business unreliability. That’s why, please note it, I did not name my Client. As well as my name also. You’ve talked to my digital avatar, ” wrote a reputational manager.

… And so, Dmitry, you are very lucky that you turned out to be too small a bug to react to this. There, important people can, can take for a ride in the trunk. But you are just dirt under the nails for them. They don't even look at (people like you- n/tr).

And as for the festival of stupidity)) I'll tell you so) When I drive my Mercedes GL AMG 2021, you and your wife will sit in a dollar-van)) Well, which of us is stupid, she will ask you later in the evening? Think about it) By the way, it's not too late to work) you will think positive, write to me) scum, ”the letter reads. 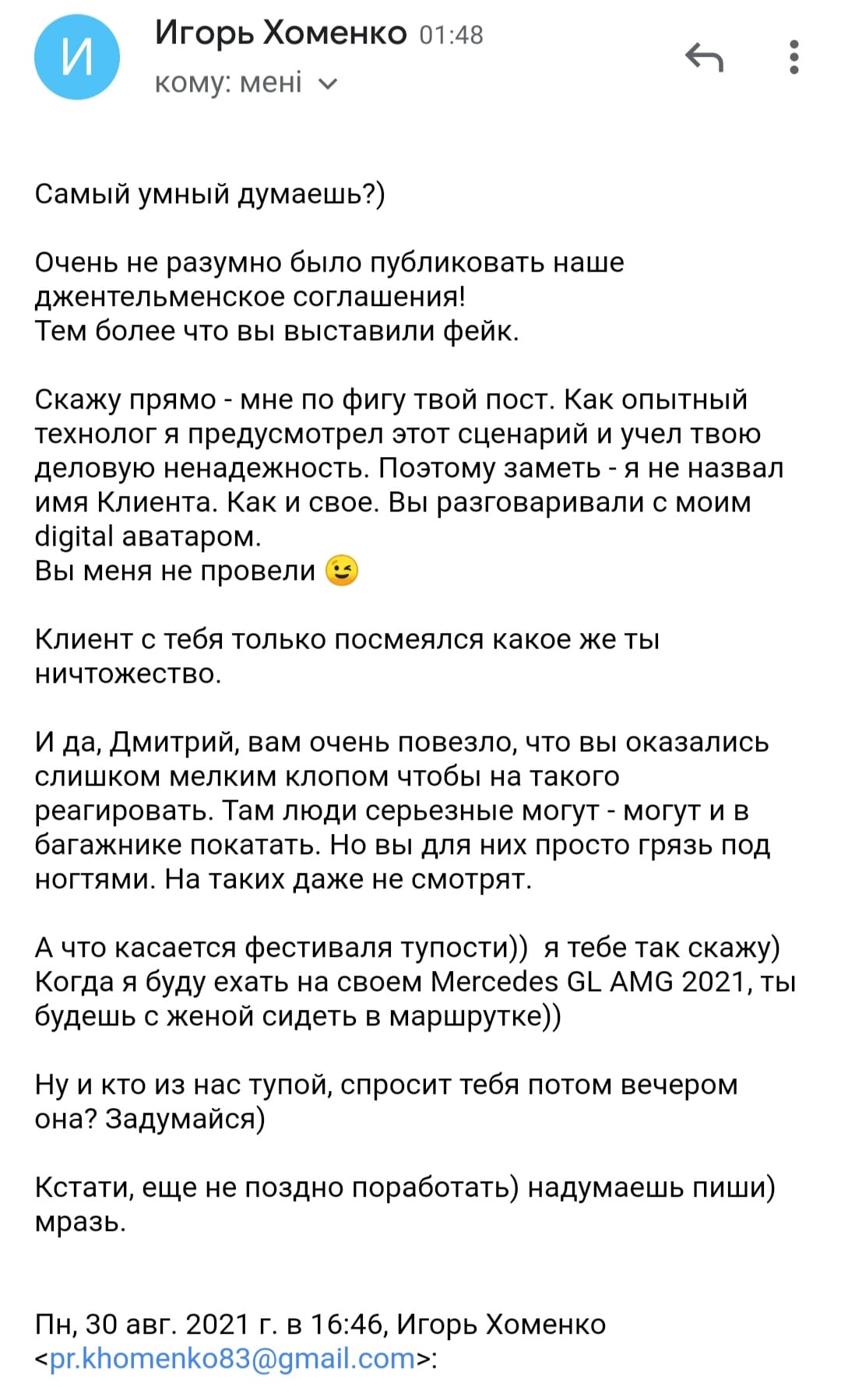 The content of this letter is perceived by the Novinarnya editor as a threat and he intends to file a criminal complaint with the police under Article 345-1 of the Criminal Code of Ukraine (threat of murder, violence or destruction or damage to property of a journalist).

“I tend to think that the name is fictitious, of course, and the image presented is also artificial. But both proposals and threats can be real, ” Dmytro Lykhoviy said.

In a post on Facebook, he reminded that the Novynarnya received proposals to "clean up" the site of negative information about one of the leaders of the ruling team in 2019, but rejected the p[ropolas.

As IMI reported, more than 30 Ukrainian media outlets took down the news about the accident involving Oleksander Trukhin, a People's Deputy from Servants of the People. A number of media outlets began receiving letters in the mail proposing to remove the story on the incident on a "commercial basis." Sites were offered a minimum of $ 200 for taking the news about Trukhin down.

The editorial offices of the Pryamiy channel and the Glavkom online publication explained why they took down the news about the road accident involving Trukhin, as a result of which six people were injured.