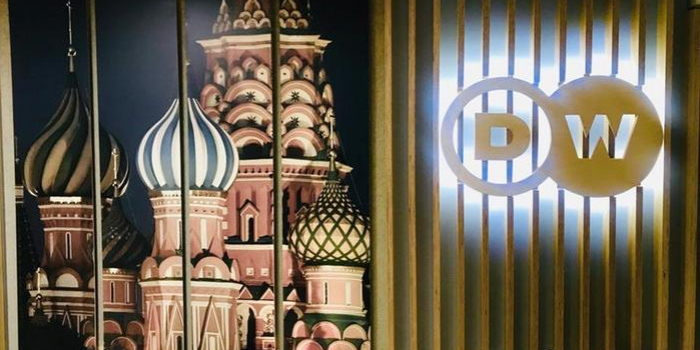 Russia's move to close Deutsche Welle's bureau in Moscow came as a "huge shock" to the staff. The team stopped their work early on Friday after having their credentials revoked, as Deutsche Welle reported.

A decision by the Russian government to shut down Deutsche Welle's Moscow office and withdraw accreditation from the German broadcaster's journalists in Russia came into effect on Friday at 9 a.m. local time (0600 UTC).

The Russian Foreign Ministry announced a day earlier that it was canceling DW's broadcasting license in Russia, calling it a response to the ban of the Russian broadcaster RT DE in Germany.

"It clearly came as a huge shock for all of us," said Irina Filatova, who works for DW's Russian service in Germany and could therefore still report on Friday morning.

The Russian Foreign Ministry said authorities might consider putting DW on the list of so-called foreign agents. The label, which has Soviet-era connotations, forces media outlets to publish a disclaimer on their content in Russia that they are "foreign agents."

"The state of press freedom in Russia has drastically deteriorated over the last years. There's been a huge clampdown by Russian authorities on independent media," Filatova said. "Many of them have been put on the list of foreign agents, meaning that they are subject to extra government scrutiny."

There are over 100 media outlets and independent journalists on this list.

Maria Zakharova, a spokesperson for the Russian Foreign Ministry, said if Germany moved to end the dispute over RT's licensing, Moscow would respond in kind.

German officials have called the comparison between RT and DW a false equivalence because DW is a taxpayer-funded independent public service broadcaster rather than a state-owned channel.

German regulators have also said their reason to ban RT DE was that the Russian broadcaster had not submitted the required documents for licensing.

"We appeal very urgently to the Russian side not to use the licensing problems of the station of the RT channel for the purpose of restricting freedom of the press and freedom of freedom of expression," Büchner said.

"I can assure you and the colleagues at DW that the concerns of the DW staff in Russia are very much known to the federal government. And generally, the press freedom situtation in Russia is also of course a matter of great importance to us, and we're in contact with Russian authorities," Sasse said.

"And at this point I'd like to say it doesn't just affect Deutsche Welle, but rather the press freedom situation for all other media organizations in Russia," she added.

The European Union also slammed the "unjustified" move by Russia. EU spokesman for foreign affairs, Peter Stano, told journalists on Friday that Moscow's ban "regrettably illustrates yet again their continuous violation of media freedom and disregard for independence of media."

A 'renewed strain' on relations

The German government commissioner for culture and the media, Claudia Roth, called the Russian move an "aggressive act."

Roth, a longstanding member of the Greens, said she had held talks with a Kremlin special adviser on culture issues a few days before the ban. "I am really sad and frankly angry, because this conversation was dedicated to the question: 'How can we improve the relationship?'"

Still, Roth said she would discuss the situation with her Russian counterpart.

"If these measures are actually implemented, this would limit free reporting by independent journalists in Russia, which is particularly important in politically tense times," a ministry spokesperson said on Thursday.