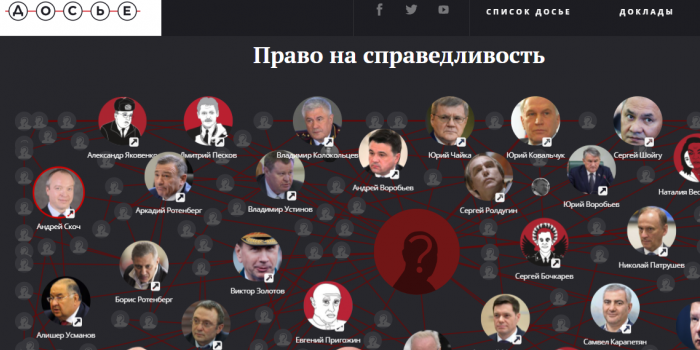 In Russia, at the request of the Tagansky District Court, the website of the “Dossier” Investigation Center was blocked. This was reported in the telegram channel of the center, the Russian service of Radio Liberty reported.

The Prosecutor General's Office entered the page "Shestun's Case" from the report "Lubyanka Federation" to the register of banned sites.

No official reason has not been communicated to the employee of “Dossier”.

"We have been blocked not for some infraction, but because we were telling the truth about the malpractice of FSB officers close to Vladimir Putin and officials, and they are vengeful guys. In the information about Shestun's case, we published exclusive moments from the conversations of FSB General Ivan Tkachev, so it is easy to assume that it could have been him who get miffed,” the center said in a statement.

Former head of the Serpukhov district Oleksandr Shestun was detained in June 2018 on charges of fraud. He claimed the case was politically motivated. A few months before his arrest, Shestun published a video message to Vladimir Putin, in which he spoke about being forced to resign under the threat of seizure of the house and criminal prosecution. According to him, the governor of the Moscow region Andrey Vorobyov demanded his resignment. In particular, the official made punlic a recording of a conversation with General Tkachev, who blackmailed him and threatened with “the roller” of criminal cases if he did not resign.

Among others things, “Dossier” investigated the murders of journalists Orhan Jemal, Kirill Radchenko and Alexander Rastorguev in the Central African Republic.