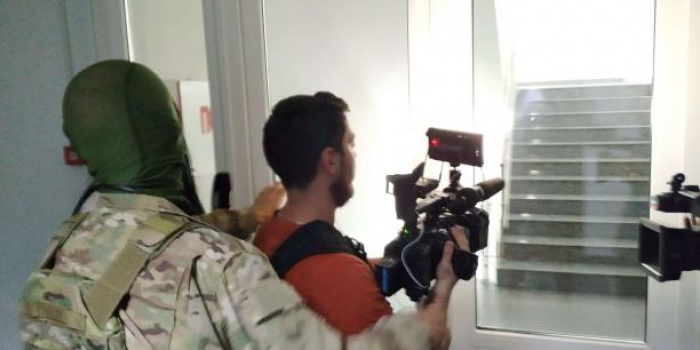 The Dnepr.info online edition reported that during the searches, the law enforcement officers did not allow its editor in chief and journalists of the local media to enter the editorial office, as it was reported on the Dnepr.info website.

“A SBU official pushed them out the floor where the editorial office was located. The law enforcer used force, obstructed journalistic activity and almost broke the cameras of the cameramen, ”the newspaper wrote.

Journalists of D1, Dnipro TV and Dnipro Operative tried to get to the Dnepr.info office together with the editor.

According to the edition, the law enforcement officers confiscated hard drives from work computers, notebooks and personal documents during the search. At the time of the search, the management and advertising manager of Dnepr.info were in the editorial office, they were not allowed to quit the premises.

As IMI reported, on June 19, the law enforcement officers in Dnipro conducted a series of searches, including in the office of a local mass media, as it was reported on the website of the Dniprovsky District Prosecutor's Office.

Thus, the Prosecutor's Office of Dnipropetrovsk region together with the SBU in the region conducted a series of searches in the criminal proceedings probing into the case of an abuse of office by officials of the municipal enterprise of the City Council while proceeding with the public procurement, which caused serious damage to the state budget (Part 2 of Article 364 of the Criminal Code) ).

According to the investigation, the municipal enterprise of the Dnipro City Council conducted tender purchases for the provision of advertising and marketing services (coverage of activity the city council, its executive bodies, officials and deputies through the media) in the amount of over 130 million UAH (around $ 4 871 000). The winners of the tenders were intermediaries, eight individuals - entrepreneurs (who have signs of being fraudulent entrepreneurs), with whom contracts have been concluded for the provision of these services. At the same time, the municipal enterprise has its own staff that actually performs that kind of  work.