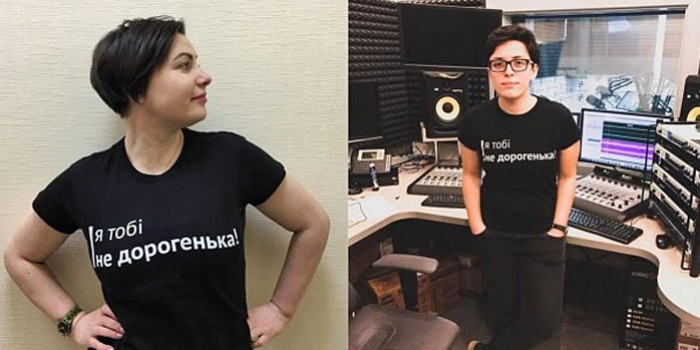 The Kyiv Cyber ​​Police Directorate of the National Police considered the complaint filed by the movers of the flashmob #iamnotdarlingtoyou Iryna Zemlyana and Yelyzaveta Kuzmenko as a "collective citizens’ appeal" over harassment and threats against them on social networks. This is said in a letter from the cyber police department to the head of the National Police in Shevchenkivsky district in Kyiv the police colonel Dmytro Shemeyko.

The letter from the cyber police department said that they received the "collective public appeal" of Iryna Zemlyana and Yelyzaveta Kuzmenko about allegedly unlawful actions committed against them.

“Given the aforesaid and taking into account the fact that there are no investigative units in the structure of the Cyber ​​Police Department of the National Police of Ukraine, as well as according to the Procedure, clause 9 of Section II“ On Approval of the Procedure for Unified Accounting of Complaints and Reports and Other Events in Agencies (Units) of Police”, approved by order of the Ministry of Internal Affairs of Ukraine of 08.02.2019 №100, I address the collective appeal of Kuzmenko Y. and Zemlyana I. to you, in order to conclude about the issue, as to the art.214 of the Code of Criminal Procedure of Ukraine,”, - the letter signed by the chief, police colonel Anatoly Skyba reads.

Iryna Zemlyana found that cyber police was not ready to investigate cyberbullying cases, although this is a serious problem at present.

“88% of Ukrainian media professionals faces cyberbullying under some form or other. This is a serious and undervalued problem right now. Online harassment leads to emotional burnout, self-censorship, and sometimes it leads to physical violence. As we can see it now, the cyber police is not ready to probe into the cyberbullying cases for now. Moreover, they do not even treat the complaint about the offense as a complaint, but as a collective appeal. Of course, this is only the beginning of the story of the media professionals fighting the cyberbullying, but we had been expecting more promising start ”, - Iryna Zemlyana commented on the cyber police’s letter.

IMI lawyer Ali Safarov said that the authors of complaint could file complaint against the actions of the cyber police, contesting it as illegal ones, since the police qualified the complaint as a collective appeal of citizens, thereby bringing the complaint out of the requirements of criminal procedural law.

He recalled that, in accordance with part one of Article 214 of the Criminal Procedure Code of Ukraine, the investigator, the prosecutor shall promptly, but not later than 24 hours after submitting the complaint, report on the committed criminal offense or upon identification of any source of circumstances that may testify about committing a criminal offense, is obliged to enter the relevant information in the Unified register of pre-trial investigations, to initiate an investigation and to provide the applicant with the information within 24 hours from the submission of such information to the Unified Register of Pre-trial Investigations. Part 4th of the Article 214 of the Criminal Procedure Code clearly stipulates that an investigator is obliged to accept a complaint about a criminal offense. It is neither allowed to refuse to accept it, not register a complaint or report of a criminal offense.

“However, in this case, the cyber police department calls the report on offense as a collective appeal, thus bringing the complaint filed by applicants out of the requirements of criminal procedural law. At least such actions enable the applicants the right to complain against these actions of the Kyiv Cyber ​​Police Directorate as illegitimate ones, ”the lawyer stressed.

As IMI reported, on September 10, 2019, IMI media expert Iryna Zemlyana and human rights activist Elizaveta Kuzmenko, movers of the #iamnotdarlingtoyou (#yatobinedorogenka) flashmob, have filed the complaint to the police about having been harassed and threatened on social networks. The relevant complaint was lodged to the department of cyber police of the National Police and to Commissioner for Human Rights in the Parliament.

The  screenshots of threats and bullying in social networks were joined to the complaint.

“Since the harassment and cyber bullying is systematically done, it looks like deliberate action. So we have a suspicion that we are intentionally targeted on Facebook page related to some political forces," the statement said.

In this regard, media experts ask the National Police to submit relevant information to the Unified Register of Pre-trial Investigations and to initiate proceeding, as well as to take other actions within in accordance with the legislation in force.

They asked the parliamentary Commissioner to record that incident and to take appropriate measures.

On March 7, 2018, Iryna Zemlyana and Elizaveta Kuzmenko posted on their personal pages on Facebook, and launched a flash mob #iamnotdarlingtoyou protesting against sexism of politicians towards the journalists.

IMI reported the #iamnotdarlingtoyou movers claimned they would file complaint to the police in order to set the preccedent.

“Our goal is to set a precedent. Actually, we don’t know what, in fact, can be done to counteract the online bullying. That is why we want to record all these incidents and the fact that we contact the police, so that changes can be made later to protect at least journalists against cyberbullying. Because they are affected by harassment, " the flashmob movers said.