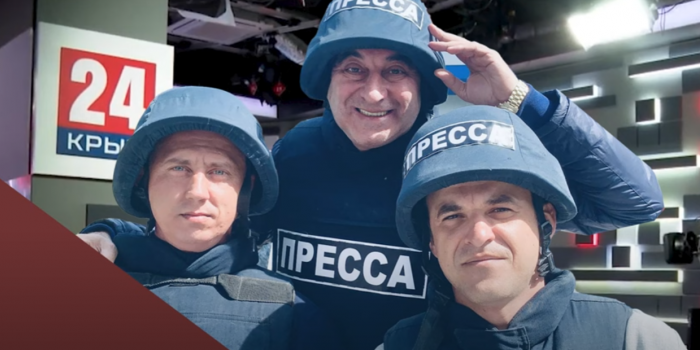 The Prosecutor's Office of the Republic of Crimea and the city of Sevastopol opened a criminal case following a series of investigations by the Center for Journalistic Investigations regarding employees of TV company "Krym 24". These employees have been producing and distributing content with signs of war propaganda, justification of Russia's armed aggression against Ukraine and the occupation of its territory, as well as glorification of the participants in the aggression. These acts could amount to the crime provided for in Part 3 of Art. 436-2 of the Criminal Code of Ukraine, the media's website reports.

To produce propaganda content, "Krym 24" has created branches in Kherson and Zaporizhzhia, as well as special programs "Kherson 24" and "Zaporizhzhia 24", which were spreading Russian narratives and propaganda in the occupied territories of the South, from where the Ukrainian media had been driven out. The illegal activities were conducted with the use of property and frequencies seized from the Suspilne.Kherson television and radio company.

Six Crimean propagandists mentioned in the CJI's investigations are also involved in the criminal case. These are the managers of TRC "Krym": the legal entity's head Vadym Pervykh, general producer and adviser to the "head of Crimea" Oleh Kryuchkov, "Krym 24" editor-in-chief Daryna Safonova, as well as correspondents Margarita Semenyuk, Dmytro Koksharov and Yuriy Avdeev. All of them except Semenyuk, who is a Russian citizen and came to Crimea from Ugra, are citizens of Ukraine.

As the Crimean Prosecutor's Office told the CJI, a linguistic examination of the content produced and distributed by "Krym 24" and its media projects in the territories of the South and Crimea temporarily occupied by the Russian Federation is underway. The decision on notifying the Crimean propagandists of suspicion will depend on the results of the examination.

Autonomous non-commercial organization "Teleradiocompany 'Krym'" was created with the use of property and radio frequencies seized from the state TRC "Crimea" in Simferopol and added to the Russian state register on August 20, 2014 (TIN 9102020940). The TRC was founded by the so-called "Ministry of Internal Policy, Information and Communications of the Republic of Crimea" and is financed from the budget of the occupying government of Crimea. The company's structural subdivisions include TV channels "Perviy Krymsky" and "Krym 24", as well as radio stations "Radio Krym" and "More".