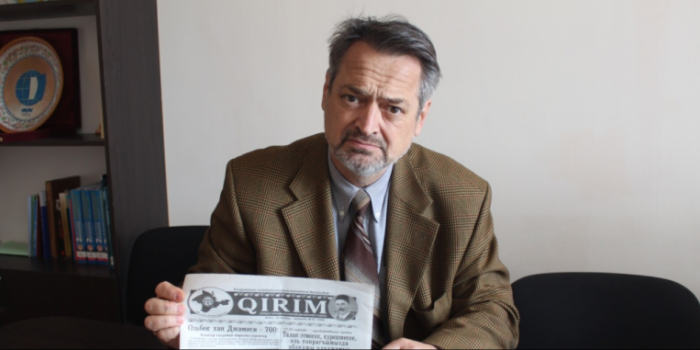 Authorities in Russian-occupied Crimea should not contest the appeal of journalist Bekir Mamutov, and should refrain from fining members of the press over their coverage, the Committee to Protect Journalists said today.

Yesterday, the magistrates’ court of the Zheleznodorozhny district of Simferopol, the capital of Russian-occupied Crimea, convicted Mamutov, chief editor of the independent newspaper Qirim, of “dissemination of information about a banned organization” without labeling it as such, according to news reports, Mamutov, and his lawyer Hatice Mamut, both of whom spoke with CPJ in a phone interview.

The court ordered Mamutov to pay a fine of 4,000 rubles (US$52), the journalist said. Mamutov told CPJ that he maintains his innocence and will appeal the verdict to the Supreme Court of Crimea.

“Russian authorities should not contest the appeal of the absurd verdict against journalist Bekir Mamutov, and must cease prosecuting Crimean journalists for simply doing their jobs,” said Gulnoza Said, CPJ’s Europe and Central Asia program coordinator. “Russian authorities have tried to silence independent Crimean voices through harassment and intimidation since they annexed Crimea from Ukraine. They should stop pressuring local journalists and allow them to work safely and without fear.”

The charges stem from Qirim’s October 14 republication of a report on human rights in Crimea by U.N. Secretary General António Guterres, the journalist and his lawyer said. In that report, Guterres mentions “Mejlis,” a local Crimean Tartar governmental body that the Russian government has labeled “an extremist organization.”

In November 2020, the Russian media regulator Roskomnadzor informed Mamutov that it had filed a complaint alleging that Qirim had mentioned Mejlis without stating that the organization was banned in Russia, according to Mamutov and news reports.

The journalist told CPJ that the initial court session was scheduled for February 16, but was delayed until March 31 after he contracted COVID-19; during the second hearing yesterday, he was convicted and fined.

Mamut told CPJ that Article 4 of the Russian media law, which pertains to labeling extremist groups, does not state the exact form in which the information about an organization being prohibited should be presented, and said that the Guterres report mentioned that Mejlis was banned in Russia, which should meet the law’s requirements. Mamut also said the law exempts journalists from liability for the reproductions of verbatim statements of the public and state officials, or publications from other mass media outlets.

Mamutov told CPJ that he believed the prosecution was retaliation for Qirim’s critical coverage of local authorities. “There are practically no media in Crimea left that are not subservient to the Russian state. So, we are like a splinter in the authorities’ finger,” he said.

Qirim is a print newspaper that covers issues affecting Crimean Tartars, the indigenous population of the Crimean Peninsula, and frequently covers human rights abuses and reprints news reports and international publications relating to Crimea, according to Mamutov and copies of the newspaper that CPJ reviewed.

Since Russia annexed Crimea from Ukraine in March 2014, occupying Russian authorities have systematically persecuted Crimean Tatars, according to CPJ research. In 2016, following Mejlis’ criticism of the annexation, Russia branded it as an extremist group; Mejlis’ activities are allowed in Ukraine, where its leaders operate in exile, according to reports.

CPJ emailed Roskomnadzor’s Crimea office and the Zheleznodorozhny district court of Simferopol for comment, but did not receive any responses.