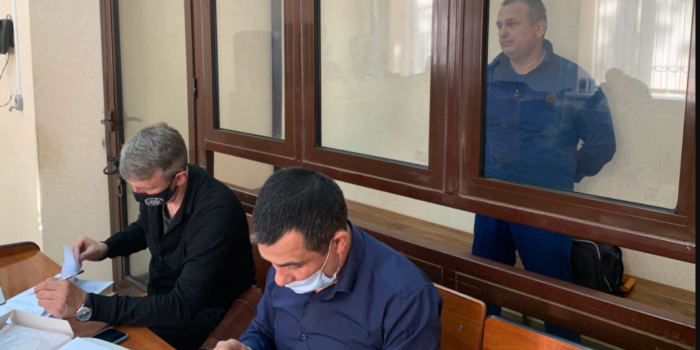 A court in Russian-occupied Crimea has extended the detention of an RFE/RL freelance correspondent by six months as dozens of people rallied in the Ukrainian capital to call for his release, as Radio Free Europe/Radio Liberty reported..

In a closed-door session on July 6, the court in Simferopol ruled that Vladyslav Yesypenko, who has been held since March, will remain behind bars until December as he awaits trial. The next hearing is set for July 15.

During his apprehension, the FSB claimed that it found an object "looking like an explosive device" in his automobile; he was later charged with "making firearms."

The crime is punishable by up to six years in prison.

Yesypenko testified during a closed-door court hearing in April that he was tortured with electric shocks, beaten, and threatened with death unless he "confessed" to spying on behalf of Ukraine, his lawyer reported at the time.

"Vladyslav Yesypenko is guilty of nothing more than being a journalist. He was trying to share the truth about the situation in Crimea with the outside world before facing detention and apparent torture at the hands of his Russia-based captors," Fly said in a statement.

"The only legitimate verdict this judge could render is a finding of innocence and Vladislav’s immediate return to his wife and daughter.”

Human rights activists and journalists joined Yesypenko’s wife on Maidan Square in Kyiv following the court hearing to demand his release. A similar demonstration was held in Vinnytsya in western Ukraine.

The groups encouraged supporters to take part in an online campaign using the hashtag #FreeYesypenko and to send letters of support to the jailed journalist.

Oleh Sentsov, a Crimean journalist and film director who was jailed by the Kremlin for five years, was among those who addressed the rally in Kyiv.

Sentsov, who was freed in September 2019 as part of a prisoner swap, told the crowd it was important to raise awareness about Ukrainian citizens imprisoned by Russia on trumped-up charges.

Ukrainian Foreign Minister Dmytro Kuleba earlier in the day took to Twitter to demand his release.

Russia has sought to crush dissent in Crimea, including prosecuting journalists and human rights activists, since seizing the Ukrainian peninsula in March 2014.

Press freedom advocates, including the Committee to Protect Journalists and Reporters Without Borders, along with Ukrainian Foreign Minister Dmytro Kuleba and U.S. State Department spokesman Ned Price, are among those who have called for Yesypenko’s immediate release in the absence of any evidence of wrongdoing.

Freedom House noted that Yesypenko’s detention is only one example of the harassment directed at RFE/RL journalists working in Crimea.