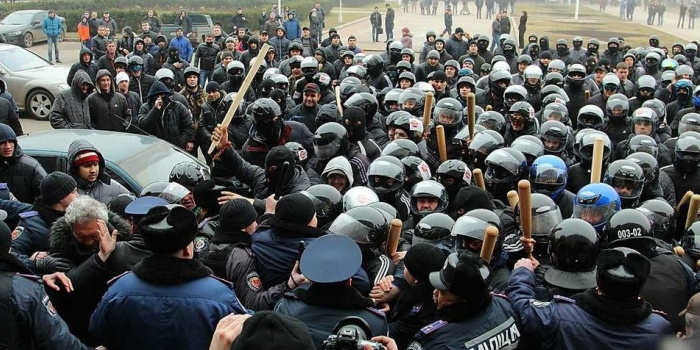 On July 20, the Primorsky District Court of Odesa sentenced an Odesa citizen who had taken part in the violent dispersal of a peaceful rally and the beating of journalists near the Odesa Regional State Administration on February 19, 2014, to five years in prison with a three-year probation period.

The according paper was published in the Unified State Register of Court Decisions, reports Suspilne.

As noted in the text of the sentence, the man was one of about 200 titushkas who were hired by the Euromaidan opponents in Odesa to "violently respond" to peaceful protests. In particular, to intimidate Euromaidan activists and apply physical violence against them.

On February 19, 2014, the accused, together with about 200 other titushkas, arrived to the building of the Odesa Regional State Administration, where a protest against the mass shootings on the Kyiv Maidan was taking place. The men were dressed in black and dark gray winter jackets, motorcycle helmets, ski goggles, knee pads and elbow pads. They had with them wooden bats, clubs, metal rods and rebars. On their jackets they had St. George's ribbons with "Stop Maidan!" and "Odesa without Maidan!" stickers on them.

The investigation established that the defendant attacked a TV channel's cameraman who was covering the rally. He struck him on the legs with a metal rod several times, knocked him down on the concrete and interrupted the video recording.

On July 8, 2022, the accused entered into a plea agreement. The court approved it, the man was sentenced to five years in preason, but released from serving the sentence – he was given a three-year probation period.

Oleksandr Orlov, the former deputy head of Odesa Regional State Administration, is currently on the dock in the February 19 case. He is accused of involvement in the protest dispersal and the beating of journalists on January 19, 2014. The Odesa Prosecutor's Office submitted the indictment against Orlov to the court in the spring of 2017. The next hearing is scheduled for September 23.