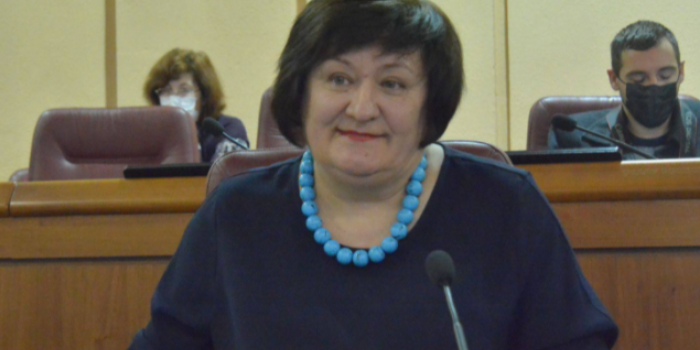 The Dnipro Court of Appeal reduced the redress sum demanded by the director of the Kryvy Rih City Council's municipal enterprise, Andriy Vasylyev, in his lawsuit against journalist and City Council deputy Natalia Shyshka. However, the court upheld the first instance court's decision regarding the illegal use of the ME head's photo and his demands that the journalist refute the information she published.

The court of appeal made such a decision on November 22.

The court of appeal changed the sum of moral redress that the journalist had to pay to the plaintiff. The amount has been reduced from UAH 50,000 to UAH 30,000.

We will remind you that on July 18, the first-instance court, the Saksagansky District Court of Kryvy Rih, declared that Natalya Shyshka used a photo of the ME's head in her publications illegally and charged her UAH 50,000 in the plaintiff's favour. In addition, the court ordered the journalist to take down the information degrading Vasylyev's "honor, dignity, and business reputation" from her personal Facebook page. In the decision, the court listed the posts from which information should be removed. Natalya Shyshka believes that such a demand cannot be fulfilled.

In her comment to an IMI representative, Natalya Shishka, "Domashnya Hazeta" journalist and a member of the City Council from "People's Power" party, said that she was being sued for nine posts that she shared on her Facebook page. Some of them, she noted, were also published by "Domashnya Hazeta". In these posts, the journalist wrote about the activities of the ME "Ritual Service Plus" of the Kryvy Rih City Council and about the enterprise's head, Andriy Vasylyev. Shyshka is being sued by Andriy Vasylyev and his wife, Alina Vasylyeva.

"Vasylyev did not mention (in the lawsuit. – Ed.) any specific statements. In his lawsuit, he said that he does not consider the publications to be unreliable in any specific part. He believes that all my publications create a negative image of him from the first to the last word. And I asked them to tell me which information exactly is unreliable and degrades his honor and dignity. So that I could continue my defense. But until the very end of the trial, no quotes, no specific statements were given to me," Natalya Shyshka said in her comment to an IMI representative.

Natalya Shyshka considers such actions "an attack on freedom of speech" and is ready to go to the European Court of Human Rights. She is currently preparing a cassation appeal.

"A person's photo can be used by someone else only upon consent from the person depicted in the photo (paragraph 1 of part 1 of Article 308 of the CCU). Whereas in order to mention a person's name to cover their work (or the work of the institution where they work), you just need to have the papers for such an activity (Part 3 of Article 296 of the CCU), asking for consent is not necessary. Obviously, not everyone who is depicted in a photo shared in the mass media or social media without their consent will sue the poster for it. But formally, that person has the right to sue, as we can see, sometimes people mentioned in a material use this right, if they are unhappy with the context in which they were mentioned. Journalists should keep this in mind when working on critical reports, because this aspect can become a weak spot when it comes to legal defense this or that material," said the lawyer.

As IMI reported, on December 28, 2021, the Saksagansky District Court of Kryvy Rih (Dnipropetrovsk oblast) seized the apartment of journalist and City Council deputy Natalya Shyshka due to her Facebook publication that included a photo of Andriy Vasylyev, the head of the ME "Ritual Service Plus". With this ruling, the court granted the lawsuit filed by Vasylyev's wife for publishing "a photograph of her together with her husband, taken from her account on the social network Facebook and used by the defendant under a post without her consent."

The Facebook post in question was published by Natalya Shishka on November 16, 2021. In it, she shared the text that she wrote for "Domashnya Hazeta" regarding her own petition entitled "Stop scamming Kryvy Rih citizens for funeral services." In her post, Natalya Shyshka also used a photo of Andriy Vasylyev with a priest and a woman. However, according to Natalya Shyshka, she had removed the woman from the photo even before hearing that the court decided to grant the lawsuit.