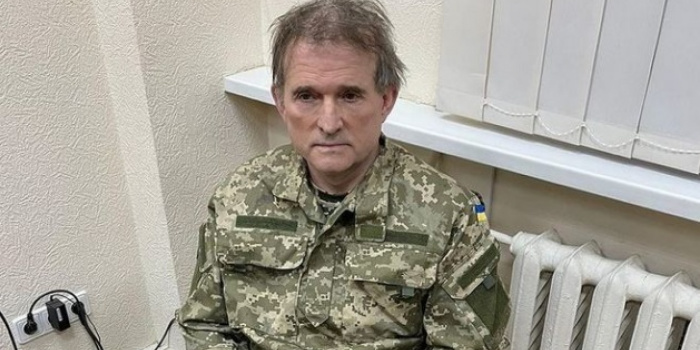 This way the Court granted the request made by a special investigator of the State Investigation Bureau's Central Investigation Department and approved by the Prosecutor General.

According to the request, Medvedchuk had been notified of being suspected of committing criminal offences described in Article 28 p. 2, Article 111 p. 1, and Article 258-3 p. 1 of the CC of Ukraine. On January 10 of this year, Pechersk District Court of Kyiv had sentenced the suspect Medvedchuk to house arrest with a prohibition to leave his Kyiv apartament during day or at night. However, on February 26, law enforcers had not found Medvedchuk in his assigned place of residence – he had neglected the obligations imposed on him by the court.

Since Medvedchuk's location was unknown, on March 2 law enforcers issued a national, interstate and international wanted persons notice on him.

Moreover, on March 18, Lychakiv District Court of Lviv arrested Medvedchuk as a suspect in the aforementioned criminal offences without stating the bail sum (in absentia).

The Court has also stated that Medvedchuk had been detained on April 12 and taken to the pre-trial investigation authorities on April 14.

"After examining the request in question, the investigating judge decided to leave bail-free detention as a preventive measure for the suspect Medvedcuk Viktor Volodymyrovych," the court ruling states.

The suspect and his defender can file an appeal contesting the court's decision.

We remind that Viktor Medvedchuk had been under house arrest, but before the start of the full-scale invasion he disappeared and was in hiding. According to UP, law enforcers had intelligence that the suspect had left his estate around February 24, turned off his phones and had not been in touch since. On March 18, 2022, Lychakiv District Court of Lviv chose detention as preventive measure for Viktor Medvedchuk.