Commission on Journalism Ethics urged misinformation bill to be revoked 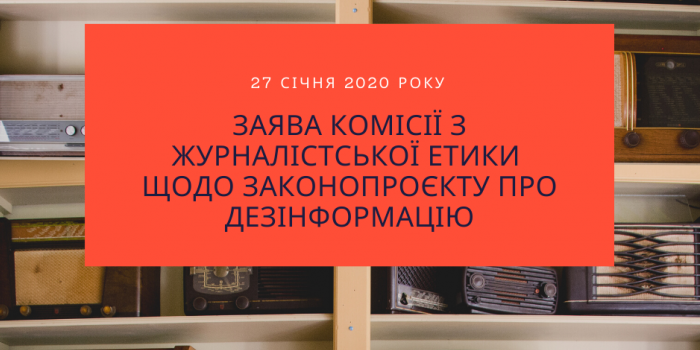 The Commission on Journalism Etrhics (CJE) urged the government and the Ministry of Culture, Youth and Sports to revoke the so-called misinformation bill and to start drafting legislative changes from scratch, as CJE said in its statement they made public on January 27.

"In a form, as the legislative initiatives are submitte d for consideration, they are unacceptable, they violate the basic principles of media independence and self-regulation of journalists," the commission said.

The CJE also said they are “strongly opposed to the draft law” submitted by the ministry, “and sees no possibility of refining it or improving it as a result of public discussion”.

“The CJE reminds the government that, together with journalistic and industry organizations, they have done a significant part of the work on the plan and program, how to regulate the issues of national press cards, and to increase the responsibility of journalists within the real self-regulation. This difficult path cannot be ruined with the substitution of concepts, the creation of pseudo-self-regulation or the introduction of bodies of state control over activities of journalists who have the authority of censorship bodies, ” the statement reads.

The commission also stressed that responsibility for compliance with professional standards and responsibility for the actions of individuals against the state cannot be combined in a single bill. According to the CJE, the former must be regulated through journalistic organizations and the latter is to be regulated through the responsibility of law enforcement agencies. Such a delineation should put an end to speculation and attempts to impose censorship, by bare hands of the journalists themselves.

In addition, the CJE does not support the role of the News Commissioner, which is set out in the draft law.

“In our opinion, this Commissioner should stand up for the protection of honest and professional journalists and have the appropriate powers: to help editorial staff and journalists to get information, to protect them against persecution, to respond in due time to threats to the lives and health of journalists. It is of great concern also the introduction of criminal liability for misinformation, ”the statement said.

The CJE notes that, together with all partner organizations, it is willing to be engagd in working out of legislation that "will make the mass media in Ukraine really free, independent and responsible."

As IMI reported, on January 27, representatives of the media community and public organizations recommended that the Ministry of Culture, Youth and Sports refrain from registering a bill on misinformation in the parliament.