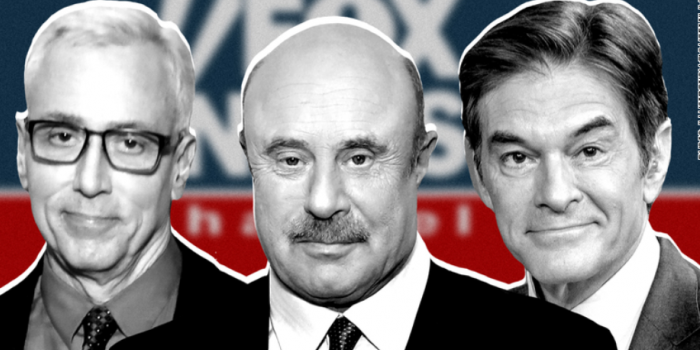 "Since the arrival of the coronavirus pandemic, the conservative network has hosted Dr. Mehmet Oz, Dr. Drew Pinsky, and Dr. Phil McGraw on its programs.
While the three household names have all had success in daytime television, each of them has previously faced serious criticism from medical professionals. Moreover, none of them are infectious disease experts.
And yet Oz, McGraw, and Pinsky have all appeared on Fox News, making comments that support the network's editorial viewpoint, but which fly in the face of what health officials have said about the coronavirus.
In the weeks before President Donald Trump declared a national emergency over the pandemic on March 13, Fox News hosts and personalities spent continually downplayed the seriousness of the coronavirus."
Neither Oz, nor McGraw, nor Pinsky are on the payroll of Fox News. The network does have a pool of paid medical contributors, which includes Dr. Marc Siegel, Dr. Martin Makary, and Dr. Janette Nesheiwat, that it regularly uses to discuss the virus.
But Oz, McGraw and Pinsky are household names, giving what they say and the advice they dispense significantly more weight. And the comments each of them have made while on Fox News have supported the message the network was promoting at one point or another.
A spokesperson for Fox News declined to comment for this story. But all three doctors have walked back the controversial comments they've made during their appearances on the network" (...).
It worth to note, "McGraw is not a medical doctor; he holds a doctorate in clinical psychology, but is not licensed to practice. On Thursday night he appeared on Laura Ingraham's Fox News show where he appeared to criticize the shutdown.
"The economy is crashing around us and they're doing that because people are dying because of coronavirus," McGraw said. "I get that, but look, the fact of the matter is we have people dying -- 45,000 people a year die from automobile accidents, 480,000 from cigarettes, 360,000 from swimming pools -- but we don't shut the country for that."(...)
McGraw faced a brutal round of criticism for his comments, with his name trending on Twitter Friday morning.
Critics pointed out that automobile and swimming pool accidents are not contagious causes of death.
Moreover, his comments about swimming pools were grossly inaccurate. According to the Centers for Disease Control and Prevention, there were 3,536 unintentional drownings in the United States form 2005 to 2014 — not the 360,000 annually as McGraw said.
In a video posted online Friday afternoon, McGraw apologized and acknowledged his errors.
"Last night I said we as a society have chosen to live with certain controllable deadly risks every day: smoking, auto crashes, swimming."(...)