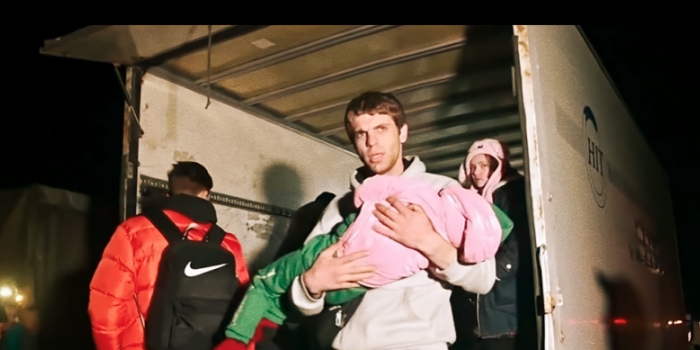 A clip about Mariupol refugees by Zaporizhzhya photojournalist Dmytro Smolienko was included in the Pink Floyd music video "Hey Hey Rise Up," which they recorded together with Boombox leader Andriy Khlyvnyuk in support of Ukraine.

The photo correspondent said this in an interview to IMI representative in Zaporizhzhia region.

According to Dmytro, the Reuters news agency asked him to film a video about the first refugees from Mariupol who arrived in Zaporizhzhia on April 2.

“It was the first time that I was filming a video. So I'm out there filming, and I see the exact shot, which, in the end, made the whole photo report – a man carrying his daughter out of the truck. They brought those people here in the trucks which had delivered humanitarian aid to Mariupol. Back then, the occupiers allowed people to get in there, so they were arriving in the trucks. And there is this father carrying out the child. And I'm filming a video, not taking a photo! And later, at night, Reuters told me that Pink Floyd had taken this clip of mine for a music video," the photo correspondent said.

"I first heard Pink Floyd when I was 13, and I was stunned. If I had been told then that I would be involved in their work, I would not have believed it. And if they did convince me, I would have just gone crazy from happiness. But here, such an occasion, such a video that no one understands how much more we will have to film. And, well, the feeling was like, 'ok, I took that video, whatever.' I'm not a videographer, but it was nice," he said.

We remind that in April, after a 28-year creative break, Pink Floyd released a song in support of Ukraine with Andriy Khlyvnyuk's vocals – "Hey Hey Rise Up" ("Hey Hey Rozveselymo"), based on the Sich Riflemen's song "Oy u Luzi Chervona Kalyna," dedicated to Ukraine.

"It’s a really difficult and frustrating thing to see this unjust attack on an independent, peaceful, democratic nation. Many people were killed by one of the world's major powers," noted Pink Floyd guitarist and vocalist David Gilmour, whose daughter-in-law is from Ukraine.