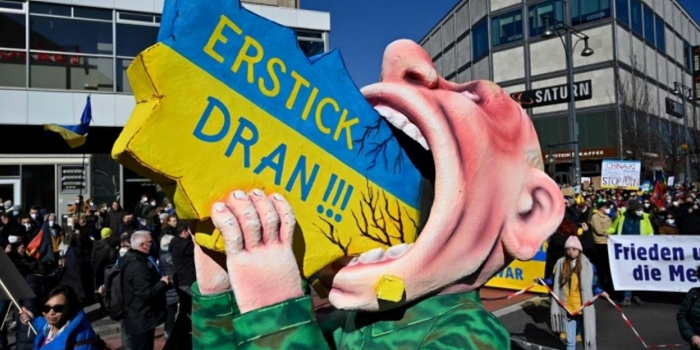 The Commission on Journalistic Ethics (CJE) has prepared recommendations for the use of stylistically colored vocabulary in journalistic content about the war.

Student Vlada Dubyk, turned to CJE with a question about the use of such vocabulary. She asked whether journalists should avoid vocabulary such as "orcs," "ruscists," "ruscism," and about writing the words "russia" and "putin" in all lowercase.

According to CJE, in the last three months, such colorful vocabulary has been used not only in journalistic texts not noly of the publicistic kind (author's column, feuilleton, essay, etc.), but also of the informational kind, namely, in news headlines: "The Ruscists Are Ahelling Mykolayiv," "The 'Orcs'' Adventures in Chornobayivka."

The Commission on Journalistic Ethics has analyzed the practice of using stylistically colored vocabulary and prepared appropriate recommendations.

Regarding the terms "ruscism," "ruscists," and their derivatives. In the vast majority of cases, it is a question of using stylistically colored synonyms for the expressions "russian occupying troops," "russian invaders," "the military of the aggressor state" and so on.

The CJE believes that the use of such words in journalistic texts does not in any way constitute discrimination of a group on the basis of nationality. It is not a question of belonging to a certain nationality, but of belonging to a group that is hostile to Ukrainians, professes russian-fascist ideology and acts in accordance with it, the CJE notes.

The term "ruscism" as an abbreviation of "russian fascism" is being actively interpreted by Ukrainian and foreign scholars, this term is becoming commonplace among experts. The Commission notes that it does not see any violations in the use of the words "ruscism," "ruscists" in relation to the russian occupiers and other supporters of the russian-fascist ideology. "Recognition of the russian regime as fascist is important for the consolidation of all anti-war forces and the cessation of any contacts with the aggressor state," the statement says.

At the same time, the CJE warns against using these terms to describe the entire ethnic group of russians.

"If it is important to maintain the legal accuracy of the terms in the news (for example, in the news about accountability for war crimes), journalists should adhere to neutral vocabulary and use the terms mentioned in Ukrainian legislation, as well as terms of international law," CJE says.

Regarding the spelling of proper names associated with the aggressor country ("Russia / russia", "Putin / putin"). The tendency to write proper names in all lowercase has spread with the beginning of the full-scale russian invasion, it has even been picked up by the websites of the Ukrainian authorities.

On the air of the national telethon, the author of school textbooks on Ukrainian language and literature, associate professor of Borys Hrinchenko Kyiv University Oleksandr Avramenko explained this trend as follows:

"In fact, the rule is this: the names of people and names that are used contemptuously are written in lowercase. And this rule is old. For example, "nazis," "putin" we can safely write in lowercase, it meets the requirements of the current spelling. As for the name of the country, there is no rule for this in the spelling, but by analogy, given the situation in the country, I think this rule can be applied to it."

CJE notes that it leaves the decision to write proper names "Russia / russia" and "Putin / putin" to the discretion of the editorial boards.

"The media can continue to follow the rules of capitalization, as this ensures the neutrality of the text, especially the news. The media can also use lowercase letters as a stylistic device, if such is the conscious choice of the editors and it is dictated by the context of the content. At the same time, the media should explain such changes and the reasons for the decision to the audience in their editorial policy," the Commission notes.

CJE also published separate opinions of the members of the Commission: Tetyana Pechonchyk, Serhiy Huzy, Diana Dutsyk, Serhiy Tomilenko, and Svitlana Ostapa. They believe that words such as "Putin" and "Russia" are proper names and should therefore be capitalized.