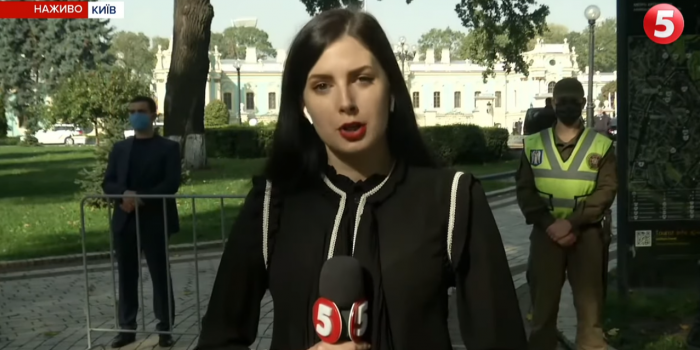 The TV crew of Channel 5 was not allowed by the state security to enter the Mariinsky Palace in Kyiv to cover the meeting of the Presidents Volodymyr Zelensky and his Polish counterpart Andrzej Duda, as the journalist with Channel 5 Iryna Sysak reported to IMI.

Iryna Sysak told, they were not put on the list of accredited media, although they had sent in advance their application for accreditation.

The security officers explained the refusal by the quarantine restrictions and the limited number of places.

“Other TV channels were allowed, as to the list of accreditated mass media. We had sent our accreditation applications. But we did not receive any letter confirming accreditation, or on the contrary, refusing it. So, at the entrance we learned that we are not on the list. As we were told, due to quarantine restrictions. Because the President's Office immediately warned that the number of media outlets would be limited. But they did not explain the principle of choosing those who should be allowed in and those who were not, ”the journalist said.

Iryna Sisak also said that among other media, which, as she saw, were allowed into the palace, were "Inter", Channel 24, NewsOne, from foreign media - Associated press, Reuters.

As IMI reported, May 27, at the request of the IMI, the Office of the President replied that the list of accredited media representatives at a press conference of the President Volodymyr Zelensky, held on May 20, was formed one time and on the principle of popularity rating of mass media. But the OP did not specify on the basis of which ratings these media were selected.