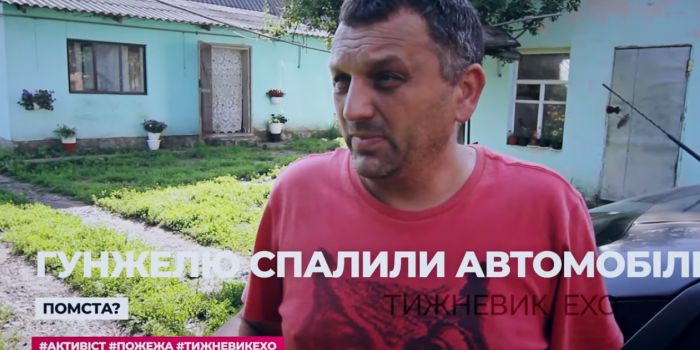 Photo credit: Screenshot from the video of Ekho weekly

Pavlo Gunzhel, editor-in-chief of Khroniky Hromad (Communities’ Chronicles) newspaper, and a deputy of the Butenkivska United Territorial Community (Poltava Region), said that his Fiat car had been burned. He related arson with his journalistic activity, as he said it to the representative of IMI in the Poltava region.

The incident occurred on June 17 in the village of Butenky. The car was set on fire in the yard near the house where Gunzhel lived. He said the arson could be caused by his story on an illegal quarry in the Kobeliatsky district.

"I see relation between this arson and journalistic activity. Because all the stories prepared by the edition deal with the theft of extractable resources, ie clay and sand in the Poltava region, in particular, in Kobeliatsky district by one company that violates building codes, labor legislation. The day they set it on fire, I just came from a quarry where I blocked the movement and extraction of sand, called the police. It was in the village of Gayeve, Kobeliatsky district. At two o'clock in the morning there was an explosion, the front wheel exploded, ”he said.

Pavlo Gunzhel added that he had previously had been threatened verbally by employees of a sand mining company in the Kobeliatsky district and from employees of the village council.

As IMI reported, on March 23, 2018, in the premises of the Butenkivska village council (Poltava region), Olga Gunzhel, journalist with the local newspaper Chronicles of Communities, and Pavel Gunzhel's wife, was assaulted by village council employees.