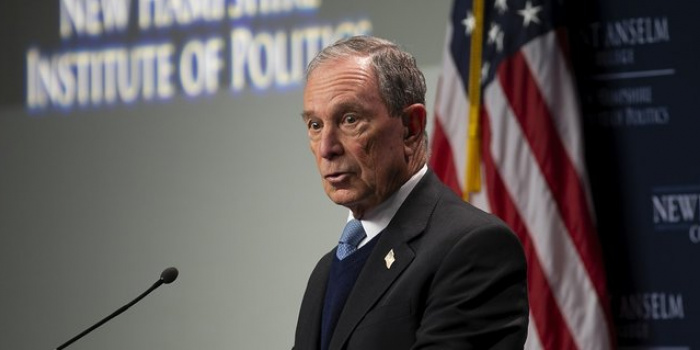 Michael Bloomberg would sell his financial information and media company if he's elected president in an effort to be "180 degrees away from where Donald Trump is on these issues," an adviser to his campaign said Tuesday, as CNN reported.

The comments come amid a barrage of attacks on Bloomberg from his Democratic rivals over how he's used the vast fortune he built through Bloomberg LP into a barrage of breathless advertising and an enormous campaign staff in the 2020 presidential race.
"There will be no confusion about any of his financial holdings blurring the line between public service and personal profiteering,"
Bloomberg campaign adviser Tim O'Brien told CNN's Christiane Amanpour Tuesday.
"We will be 180 degrees away from where Donald Trump is on these issues because Donald Trump is a walking financial conflict of interest," he added.
Trump has put the business that he built into a trust, which his adult sons. Trump has not fully divested of the Trump Organization, leading to criticism that he is profiting off his presidency when foreign dignitaries book rooms at his Washington hotel or one of his other properties. Trump also attempted to hold the next G7 summit at his Doral property outside Miami, but backed down after bipartisan criticism.
O'Brien's comments Tuesday reflect what Bloomberg said himself in 2018 when asked what he would do with his company if he ran for president and won.
"The company would either go into a blind trust or I would sell it," he said in an interview with Radio Iowa's O. Kay Henderson at the time. "But I think at my age, if selling it is possible, I would do that."
"At some point, you're going to die anyway, so you want to do it before then," Bloomberg added.
The former New York City mayor is putting his focus toward a slate of states that will vote in the Super Tuesday contest in March -- a stunning deviation from the well-worn presidential campaign playbook that calls for stops in Iowa and New Hampshire.
He'll face off against his primary rivals for the first time during Wednesday's Democratic presidential debate in Las Vegas.
O'Brien also said Tuesday that, unlike Trump, Bloomberg will release his tax returns if he's elected.
"Donald Trump has broken a tradition that's gone back to every president dating to Gerald Ford which is voluntary releasing their tax returns so American voters know the President of the United States isn't financially compromised by domestic forces," he said, "and -- I think more importantly in the moment we're in now -- foreign governments or foreign influencers who make the President more concerned about his wallet than about sound and ethical public policy making."
CNN
Liked the article?
Help us be even more cool!
Other news