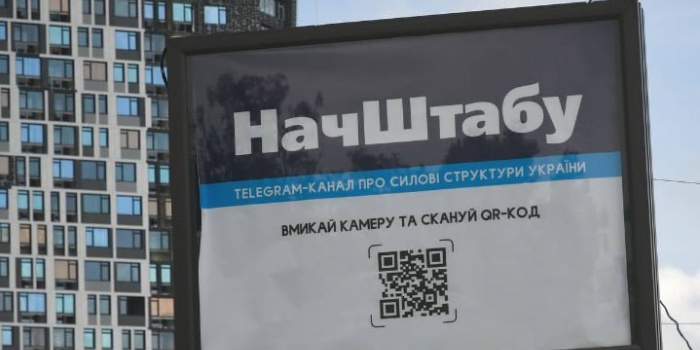 Billboards next to the General Staff of the Armed Forces of Ukraine in Kyiv advertise Russian projects : Telegram channels "NachShtabu"(Headquarter Commander) and "Chergovyi OOS" (Duty Officer of Joint Forces Operation). This was reported by "Texty".

Earlier this year, the press service of the Armed Forces warned that these resources were not related to the Ukrainian Armed Forces and were coordinated from Russia.

In order to mislead users, these Telegram channels "NachShtabu" and "Chergovyi OOS" are billed as Ukrainian ones, but they are not.

The NachShtab telegram channel is positioned as a platform where Ukrainian servicemen can communicate on sensible issues. Some elements on the location of military units, the number and composition of units, the state of equipment, armaments, etc. may appear in online discussions of military service details. This is the information beyond price for the enemy, - as they reported in the Armed Forces.

In addition, these channels were actively pitched by a number of Russian and pro-Russian media, opinion leaders of the occupied part of Donbass.