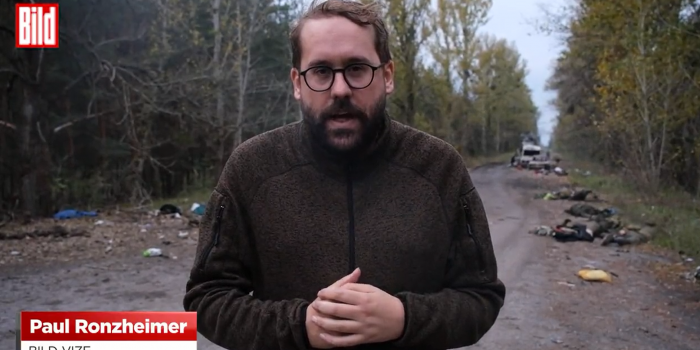 Paul Ronzheimer, correspondent of the German Bild, appeared on screen with bodies of the dead Russians on the background during his visit to the liberated Lyman, Donetsk oblast.

Ronzheimer recorded a stand-up report on the highway along which lay the corpses of Russian soldiers, their belongings and burned (probably civilian) cars scattered around.

In a Twitter caption to the video, the correspondent wrote that when visiting Lyman, his filming crew saw many killed Russian soldiers on the streets, a lot of destruction, and a woman kissing the ground because "it is Ukrainian."

Our Video-Report for @bild from inside Lyman, where we saw a lot of dead russian soldiers on the street, destruction everywhere - and a woman who kissed the soil „because its ukrainian!“ Watch 👇 Or read: https://t.co/XGjj6RSpEx pic.twitter.com/snAWzyZBIA

"The journalist deliberately used a location with a large number of dead Russian soldiers as a background for his report. In my opinion, this is not the most fortunate background, as it can be perceived as devaluing human life in general. Even though these are occupiers and murderers of Ukrainians. And, since this report was being created for a foreign audience, it may be perceived ambiguously and portray the UAF as brutal killers, and not as people who are fighting and killing for their home," IMI expert noted.

As IMI reported, the Ukrainian media are starting to change their approach to making ethical interpretations after what the Russians did in Bucha, Izyum, and Mariupol.