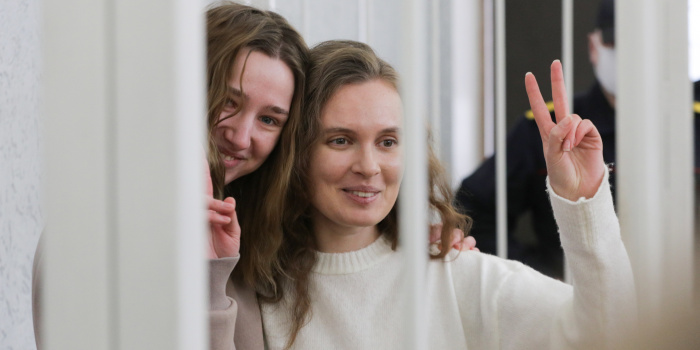 Two journalists for Belsat, the Polish satellite television station aimed at Belarus, have each been sentenced to two years in prison for reporting live from a rally in Minsk in November, as Radio Free Europe/Radio Liberty reported.

On February 18, Judge Natallya Buhuk of the Frunze district court in the Belarusian capital, sentenced Katsyaryna Andreyeva and Darya Chultsova after finding them guilty of "organizing public events aimed at disrupting civil order."

Andreyeva also demanded the "immediate release" of herself, Chultsova, and "all political prisoners in Belarus."

In a tweet on February 18, Belarusian opposition leader Svyatlana Tsikhanouskaya praised the two journalists for remaining strong after their sentences were pronounced.

"Just look at Darya and Katsyaryna -- strong, smiling, and saying goodbye to their loved ones from behind bars. Lukashenka can't break us," Tsikhanouskaya wrote.

Belarusian human rights organizations have recognized Andreyeva and Chultsova as political prisoners and demanded their immediate release and the dropping of all charges against them.

Lukashenka, who has run the country since 1994, was declared the landslide victor of an August 9 presidential election.

However, outrage over what was seen by both the opposition forces and the general public as a rigged vote has sparked continuous protests since, bringing tens of thousands onto the streets with demands that the longtime strongman step down and a new election be held.

Several protesters have been killed in the violence and some rights organizations say there is credible evidence of torture being used by security officials against some of those detained.

Lukashenka has denied any wrongdoing with regard to the election and refuses to negotiate with the opposition on stepping down and holding a new vote.

The European Union, the United States, Canada, and other countries have refused to recognize Lukashenka, 66, as the legitimate leader of Belarus and have slapped him and senior Belarusian officials with sanctions in response to the “falsification” of the vote and the postelection crackdown.