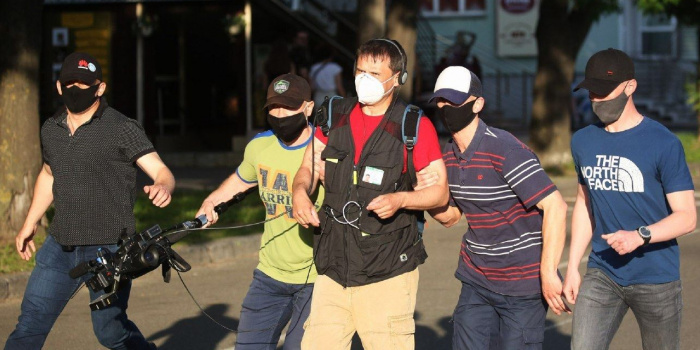 On June 19, police officers detained at least 14 journalists covering protests in Minsk, the capital, and other cities against the reelection of President Aleksandr Lukashenko, and today, local courts convicted three of them for allegedly participating in unsanctioned protests, according to a reportExternal link by the Belarusian Association of Journalists, a local advocacy group, and mediaExternal link reports, as Committee to Protect Journalist said.

“Belarusian authorities should stop detentions, arrests, and prosecutions of journalists covering protests in the run-up to Belarus’ presidential election, and ensure their safety,” said Gulnoza Said, CPJ’s Europe and Central Asia program coordinator, in New York. “Journalists should be allowed to freely report on important public events without fear of arrest or harassment.”

Today, a court in Hancevicy, near the western city of Brest, convicted Aliaksandr Pozniak and Serhei Bagrov, correspondents for the independent news website Gantsavitski Chas, on those charges, according to Barys Haretski, head of the Belarussian Association of Journalists, who spoke to CPJ in a phone interview.

Pozniak was ordered to pay a fine of 804 Belarusian rubles ($340) and Bagrov was sentenced to 15 days in detention, Haretski said.

He also said that a court in Babruysk, in eastern Belarus, convicted Serhey Latinsky, a journalist for human rights news outlet Viasna, and sentenced him to 10 days in jail, also for allegedly participating in the protests.

All three journalists denied the charges, Haretski told CPJ. He also said the police beat Bagrov and Pozniak during their detentions, giving both bruises on their faces and black eyes.

Police in the eastern city of Mahiliou detained Tut.by correspondent Anzhalika Vasileuskaya and freelancer Ales Sobaleu while they were covering protests there, according to the association’s report and Haretski.

Police in Babruysk arrested Alesia Latsinskaya and Dzyanis Nosau, reporters at the news website Bobyruisk.ru, according to a reportExternal link by their employer.

Authorities briefly detained those journalists but released them without charge, Haretski said.

CPJ called the local branches of the Ministry of interior in Minsk and Brest, and emailed the office in Babruysk for comment, but did not receive any responses.