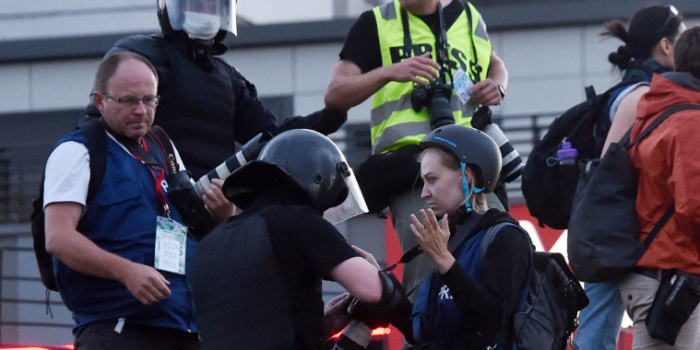 The Belarusian parliament has adopted a set of amendments to the law that significantly restrict the work of mass media. The Committee to Protect Journalists condemned this step.

In particular, on April 21, the upper house of the National Assembly, the Council of the Republic, approved amendments to local laws on the media and mass rallies. According to them, a ban on the coverage of unauthorized protests should be imposed, as well as several restrictions to launch mass media and other measures to limit the freedom of the press.

For these amendments to take effect, they must be approved by the Constitutional Court and then signed by Aleksander Lukashenko.

In a comment to the committee, Oleh Ageyev, a lawyer for the Belarusian Association of Journalists (BAJ), said that the process of working on the relevant changes to the legislation was very non-transparent.

Amendments to the media law include:

-permission for the Ministry of Information to block the work of the media or Internet resource without a court order, if they have received at least two written warnings within one year or publish something that allegedly threatens national security, according to the Interdepartmental Commission on Information Security;

-allowing the country's Prosecutor General and regional prosecutors to block access to any websites that disseminate information that they believe is "aimed at promoting extremist activities" or otherwise "capable of harming national interests";

-ban on the media “disseminating inaccurate information that may harm the state and public interests” (according to the BAJ, the wording of what exactly the information is was not clear);

-requirement for online media to use a website address that matches the name of the organization (according to Oleg Ageyev, this may be a measure to combat the use of "mirror domains" in which website content is duplicated in other web domains);

-ban on any natural person or news agency as a legal entity to open new news agencies within five years after the closure of their other affiliated publications by the authorities (for online publications - a ban for three years);

-ban on news organizations and websites from publishing the results of polls on political, social or electoral issues, if these polls were conducted without state accreditation.

The amount of fines for such violations is not specified in the amendments. According to the lawyer, they will be determined on the basis of criminal and administrative codes, depending on how the authorities interpret the law.

Amendments to the law on mass gatherings include a ban on live broadcasting or other coverage of unauthorized protests in the country.

According to Aheyev, this was probably done in response to the cases of Belsat journalists Darya Chultsova and Kateryna Andreeva, who were convicted in February 2021 for "organizing" protests against Lukashenko, although in reality they only covered them.

If these amendments come into force, the working conditions of mass media in Belarus will deteriorate significantly and it will become more difficult for Belarusian and foreign media to work in Belarus,  as the BAJ lawyer believes.

Belarusian authorities have been systematically repressing the remaining free voices in the country, and now they want to change the law to further harass independent journalists into silence,” said Gulnoza Said, CPJ’s Europe and Central Asia program coordinator. “The Belarusian government should not adopt restrictive new amendments that would critically endanger journalism in the country, and must once and for all stop persecuting journalists for simply doing their jobs.”

It will be recalled that since August 2020, the protests of people dissatisfied with the usurpation of power by Lukashenko were on. During this time, authorities detained and tried thousands of citizens, including journalists, for participating in rallies. Employees of TUT.by, Belsat and the Press Club of Belarus are currently placed in jails.