"Violations of the Minsk agreements by Ukraine," its "interference with the affairs of Belarus" and "disruption of water supply to Crimea" became the main Russian propaganda narratives on Ukraine which have been disseminated in the Russian and Belarusian mass media.

These are the results of a study fulfilled by analysts of the StopFake.org project in partnership with the NGO "Institute of Mass Information" *. 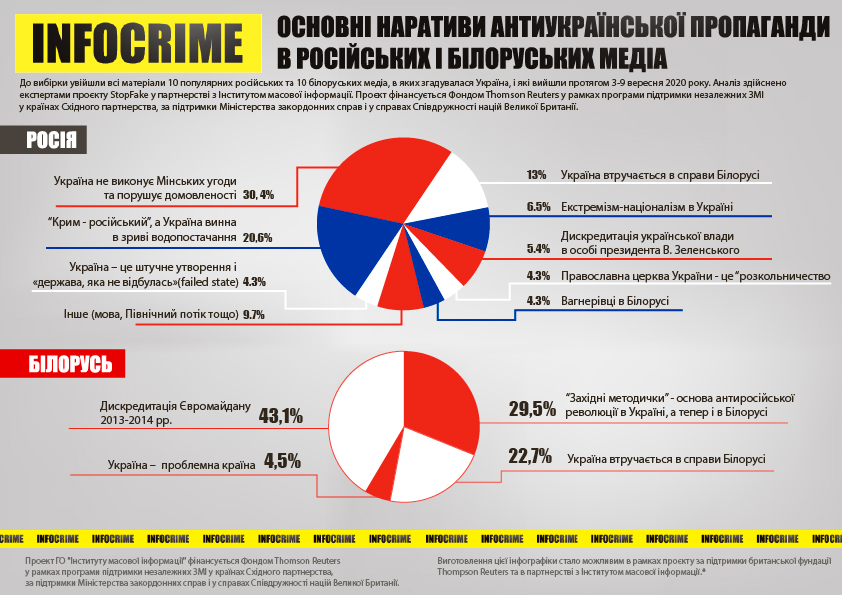 13 disinformation narratives were found in the Russian media. The most common were accusations of Ukraine of violating the Minsk agreements (30.4% of all propaganda narratives about Ukraine), disruption of water supply to "Russian Crimea" (20.6%) and interference with the affairs of Belarus (13%).

Most of the news on the Minsk agreements concerned statements made by the leader of the self-proclaimed Donetsk People’s Republic, Denis Pushylin, about "opening fire on the engineering works of the Armed Forces of Ukraine", emphasizing that the Ukrainian side allegedly ignored the demands of the DPR and LPR leaders. Russian publications covered the events manipulatively, supporting only the position of the so-called "republics" without presenting the opinion of the other party and the facts from international observers who refuted this standpoint.

The study found that a new aspect of the "Crimean narrative" was the issue of water supply to the Crimea. Russian media have been actively spreading fake news about the alleged UN statement saying that Ukraine, together with Russia, was responsible for Crimea's water supply.

Experts have recorded a new narrative in Russian propaganda : "Ukraine's interference in the affairs of Belarus." The Russian media are actively spreading the fake report saying that Ukrainian extremists and nationalists would have been allegedly involved in the protest rallies, and the protests themselves were organized following some "Western guidelines:" In particular, a number of fake and manipulative reports mentioned that even the UN had allegedly noted the role of Ukrainian radicals in the protests actions in Belarus. In fact, such a statement was made at an informal meeting of the UN Security Council on the "Arria formula" by the First Deputy Permanent Representative of Russia to the organization Dmitryy Polyansky. This fake news was refuted by Ukrainian Ministry of Foreign Affairs.

As for the Belarusian mass media, the main topic of anti-Ukrainian disinformation was the discrediting of Euromaidan in 2013-2014. In particular, mentions that "the Maidan led to the collapse of Ukraine in all spheres of life" were voiced by the Belarusian mass media for at least  19 times. The second most common topic of anti-Ukrainian disinformation was "Belarus is trying to organize a color anti-Russian revolution according to Western guidelines, as this was the case in Ukraine."

The results of the monitoring evidenced that the narrative strategy of Russian propaganda remained unchanged and the number of stories with some attributes of misinformation about Ukraine does not decrease. In view of this, the experts supposed that the identified topics ("The situation in the eastern Ukraine", "Crimea", "Ukraine as fascist / Nazi state", "Maydan", "Discrediting the pro-Western policy of the Ukrainian government / language policy", etc.) are going to be voiced in the future.

The full text of the analytics is available at the link .

** The analysis was conducted by experts of the StopFake project in partnership with the Institute of Mass Infor,mation. The project is funded by the Thomson Reuters Foundation as part of a program to support independent media in the Eastern Partnership countries with the support of the Ministry of Foreign Affairs and the Commonwealth of Great Britain.