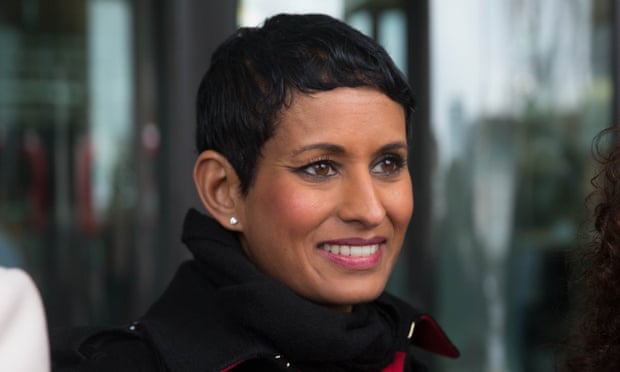 He told staff that Munchetty's words were not "sufficient to merit a partial uphold" of the complaint against her.

She had been found to have breached the BBC's guidelines over comments she made about a tweet from Donald Trump about four female politicians of colour.

Lord Hall said he "personally" reviewed the decision of the complaints unit.

A complaint against Munchetty was partially upheld after the BBC found she had criticised the US president's motives in saying four female Democrats should "go back" to "places from which they came".

At the time, the BBC said Munchetty had gone "beyond what the guidelines allow for".

On Monday, the director general reiterated that "racism is racism and the BBC is not impartial on the topic".

The reversal of the decision comes after dozens of black actors and broadcasters called on the BBC to overturn its decision.

"Why don't they go back and help fix the totally broken and crime infested places from which they came," he wrote on Twitter on 14 July.

The comments were discussed on BBC Breakfast on 17 July, where Munchetty said: "Every time I have been told, as a woman of colour, to go back to where I came from, that was embedded in racism.

"Now I'm not accusing anyone of anything here, but you know what certain phrases mean."

Her co-presenter Dan Walker said that "it feels like a thought-out strategy to strengthen his position" to which she replied: "And it is not enough to do it just to get attention. He's in a responsible position. Anyway I'm not here to give my opinion."

A viewer complained to the BBC about both presenters, however they focused only on Munchetty at the third and final stage of the complaints process.

The complaint was partially upheld by the corporation's executive complaints unit (ECU), on the grounds that the BBC's editorial guidelines "do not allow for journalists to... give their opinions about the individual making the remarks or their motives for doing so - in this case President Trump".

Now the original complainant has exhausted the BBC complaints process they still have the right to complain to the broadcasting regulator Ofcom, who could investigate further.

What did the director general say to staff?

In an email to BBC staff on Monday, Lord Hall said: "Many of you asked that I personally review the decision of the ECU. I have done so. I have looked carefully at all the arguments that have been made and assessed all of the materials.

"I have also examined the complaint itself. It was only ever in a limited way that there was found to be a breach of our guidelines. These are often finely balanced and difficult judgements.

"But, in this instance, I don't think Naga's words were sufficient to merit a partial uphold of the complaint around the comments she made.

"There was never any sanction against Naga and I hope this step makes that absolutely clear."

He added that she was an "exceptional" journalist and that he has asked editorial and leadership teams "to discuss how we manage live exchanges on air around these topics in the future."

Munchetty received widespread support. Sir Lenny Henry and Gina Yashere were among 44 stars who asked the BBC to revisit the ruling in an open letter on Friday.

At the time the BBC said the letter was "based on a misunderstanding of the editorial guidelines and how they apply".

Some BBC journalists also tweeted their disapproval at the ECU's ruling.

Presenter Carrie Gracie, who resigned her post as China editor in a dispute over equal pay, said it had caused "unease" among BBC journalists "for whom 'go back' = racist" and called on the ECU to explain its decision.

Meanwhile, #IStandWithNaga trended on Twitter, and she had supportive messages from political figures including Chancellor Sajid Javid and Labour leader Jeremy Corbyn.

Earlier on Monday, before the ruling was overturned, more than 100 MPs signed a letter to Lord Hall calling for a meeting to discuss the ECU's ruling.

Trevor Phillips, former chairman of the Equality and Human Rights Commission, said the reversal was a "good decision", but that the BBC should look at why the situation was handled "poorly", reassess its guidelines for journalists and apologise to Munchetty.

"The BBC still seems to be treating her as somebody who sort of went off the reservation for a minute or two - and that's forgiven - but they are not accepting that what she did was what every other journalist does, which is to bring an insight from their own knowledge and experience and background to their reporting," he said.

Ms Hirsch tweeted the decision to reverse the ruling was "good to see" but asked how it happened in the first place, adding: "Why did BBC mislead public in its response?"

Channel 4 presenter Krishnan Guru-Murthy, who also signed the open letter organised by broadcasters, tweeted: "A victory of sorts - now let's hope they can learn the lessons."

What did Naga Munchetty say in the first place?

Walker: It's the president. That was the most telling quote for me last night. I can't remember who said it, but she said, 'I've been told to go home many times to go back to where I've come from many times in my life, but never by the man sitting in the Oval Office'.

Munchetty: Every time I have been told, as a woman of colour, to go back to where I came from, that was embedded in racism. Now I'm not accusing anyone of anything here but you know what certain phrases mean.

Walker: Do you hear that quite regularly?

Munchetty: Yes. Not regularly, but I've been told it.

Walker: You're sitting here not giving an opinion, but how do you feel as someone when you've been told that before, and when you hear that from him?

Munchetty: Furious. Absolutely furious. And I imagine a lot of people in this country will be feeling absolutely furious that a man in that position feels it's OK to skirt the lines with using language like that.

Walker: Do you feel his use of that then legitimises other people to use this…

Walker: As our guest was saying there, it feels like a thought-out strategy to strengthen his position.

Munchetty: And it is not enough to do it just to get attention. He's in a responsible position. Anyway I'm not here to give my opinion.