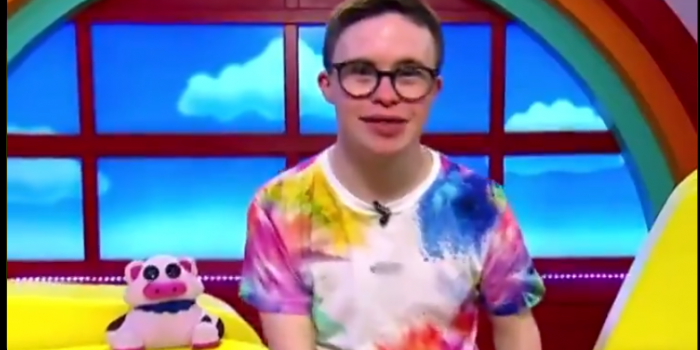 Screenshot from the video of CBeebies

Fans of a BBC children's channel have taken to social media to praise the appointment of a new guest presenter. CBeebies confirmed George Webster would be joining as a presenter on its CBeebies House. The 20-year-old, from Leeds, who has Down's syndrome, is an actor, dancer and ambassador for the charity Mencap., as BBC reported.

Twitter users expressed how important it was to see diversity on television channels which are aimed at the next generation.

George has previously appeared in a BBC Bitesize video aimed at dispelling the myths of Down's syndrome.

He said the video prompted the approach from CBeebies who offered him the job.

"Today's reaction has been amazing and I am so happy to have so much support. I am over the moon and overjoyed. It's brilliant.

"All the positive feedback has been overwhelming."

Among the people who responded to the announcement was Danni who tweeted: "As an autistic parent, I can't praise CBeebies enough for your work for diversity and representation."

Susan Corcoran tweeted: "My friend's three year old granddaughter was with Downs. They worry about her future, how others will treat her outside of their family and friendship group. This gives me faith that her life won't be as hard as that of previous generations."

Mencap, the charity for people with a learning disability, said it was excited to see its "fantastic ambassador" become a presenter.

"You are a brilliant role model so it is great you will have the chance to introduce yourself to so many people," the organisation tweeted.