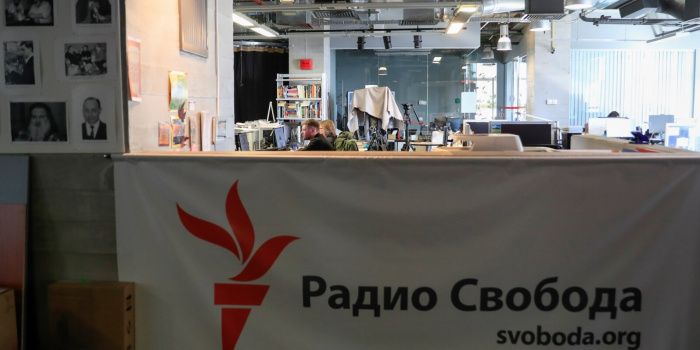 Radio Svoboda director Andrey Shary told the newspaper Novaya Gazeta that the bailiffs served journalists with documents on the initiation of the recovery process for unpaid fines, but didn’t interfere with the newsroom’s work.

According to Radio Svoboda, the documents indicate that the enforcement proceedings were initiated in connection with ten overdue fines totaling five million rubles ($67,700), as Meduza reported.

Source initially told Meduza that the bailiffs intended to seal the office and inventory its property. This was also reported by activist Alexey Minyailo, though he later deleted the posts from his social media. The bailiffs left the premises after handing over the documents and did not seal the studio.

Between January and May 2021, Russia’s censorship agency, Roskomnadzor, drew up 520 administrative fines against RFE/RL’s Russian Service and its director Andrey Shary for failing to include “foreign agent” labels on Radio Svoboda’s publications. These fines total more than 100 million rubles ($1.35 million).

In mid-April, the leadership of RFE/RL’s Russian Service offered to help some of the editorial staff from their Moscow bureau relocate to the Czech Republic or Ukraine. This was first reported by the BBC Russian Service, which directly linked this decision to the fines from Roskomnadzor.

On May 13, Moscow’s Tverskoy District Court sent 140 fines against Radio Svoboda for re-examination due to a breach of jurisdiction. The court upheld another 117 fines, totaling 28.8 million rubles (nearly $390,000).