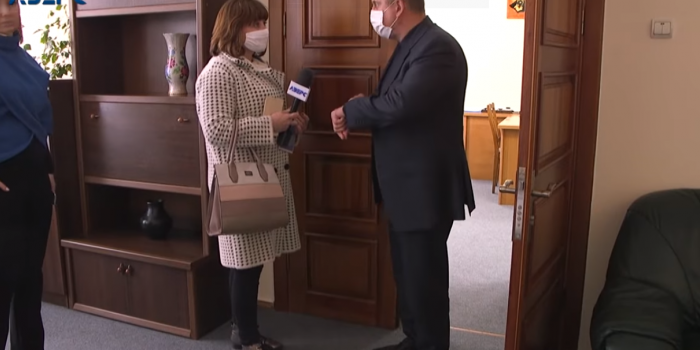 Photo credit: screenshot from the video of Avers TV

Avers TV channel in Lutsk reported that unknown men obstructed the channel's film crew in the Volyn Regional State Administration. Avers aired this story on May 8 on Youtube channel.

The story goes on to say that the official managed to avoid further conversation, so the TV crew arrived at the regional state administration in the afternoon for the second time. Speaking to the journalist, Oleksander Trokhanenko remarked that he would not talk to her about personal matters and accused her of sponsored journalism.

According to her, according to the ruling n°144 of March 16, as it has been published on the website of the regional state administration and posted at the entrance to the administrative building, several restrictions have been imposed as to access of citizens during lockdown period. As part of this order, the press service is working with journalists by phone, the comments recorded either outside or in the lobby.

“That is why we meet all media representatives at the entrance. The film crew of "Avers" did not want to wait until they went down to them, they decided to get into the room, getting in under the turnstiles. The way it was on, I watched from the video cameras from the tokens of the National Guards, who were on duty at the entrance. There was no one else in the video except the military, two cameramen and a journalist. Nobody made obstacles to them, ” Oksana Prokopchuk-Movyak said.

The IMI representative in Volyn region also asked about men who, according to Avers, did not allow the cameraman to enter the regional state administration. She commented on the situation as follows:

"As for the footage, where one of the heads of the regional state administration unit communicated with the Avers operator Myroslav, who asked about the ethical norms of journalists' work, this was a false report, which misleads the audience," she said.

Oksana Prokopchuk-Movyak also noted that at the end of the story the author called the lawyer and IT specialist with the Volyn Regional State Administration, whom they filmed at about 7 pm, "unknown young men heavily build, who were on duty near the institution and accompanied the new team on trips."

An official of PR division of Main Directorate of the National Police in Volyn region commented on to the IMI representative:

“As journalists voiced their comlaint to the police in the story itself, the law enforcement officers registered this fact properly. The information was sent to be verified, as it was voiced in the story, according to the Office of Strategic Investigations of the National Police, as these it was question of officials of public administration bodies.

IMI lawyer Ali Safarov noted that it was impossible to conclude it unequivocally from this video that unknown men made obstruction to legal activity of journalism, because it was not clear what kind of people they were and whether the cameraman recommended himself to them as a journalist.

"At the same time, their lack of uniforms or other signs of belonging to law enforcement agencies suggests that they had no authority to detain anyone and not to allow anyone anywhere," the lawyer said.

Ali Safarov advised that the best thing in such situations was to present one’s press card and explain the purpose of the visit, and then ask the interlocutors to present their documents in response and to explain the reasons for their demands, while recording all happening on camera.

“If the journalists are denied to get access furtherly, you have to call the police, and it is also desirable to record it on camera with recording the time of facts. Let me remind you that calling the police is not in itself a filing of a complaint about the delict, so in case the patrol group does not arrive or the patrol team does not accept the complaint about the delict, such a statement can be filed separately through the police control room, joining a copy of video footage of obstruction, ”the lawyer said.