At summit with Putin, Biden raises issue of RFE/RL's 'foreign agent' designation and its 'ability to operate' in Russia - RFE/RL 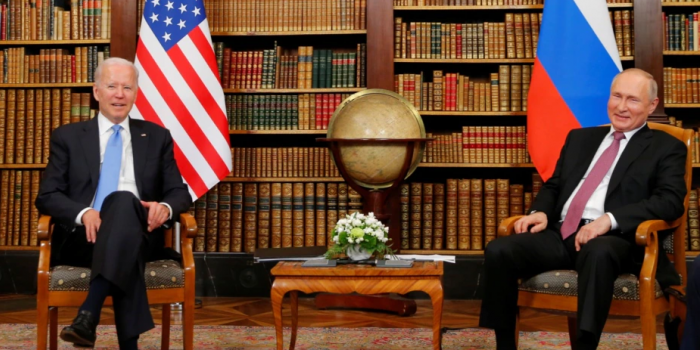 The United States has accused Russia of attempting to drive RFE/RL out of the country by listing it as a "foreign agent" media organization and imposing fines against it for failing to comply with requirements that all its materials be prominently labeled.

"I also raised the ability of Radio Free Europe and Radio Liberty to operate and the importance of a free press and freedom of speech," Biden said at his press conference in Geneva when listing some of the issues the two leaders discussed.

The same day, the European Court of Human Rights (ECHR) agreed to hear an appeal by RFE/RL against the Russian government over the "foreign agent" label and the labelling requirements.

At his own separate news conference following the summit talks, Putin said that Biden "raised the question of the work of Liberty and, uh, their Free Europes in Russia."

He repeated the Kremlin's assertion that the labeling of RFE/RL's Russian-language outlets -- including Current Time, a network run by RFE/RL in cooperation with VOA -- as "foreign agents" was a response to a 2017 decision by the United States to compel Russian state-controlled network RT, sometimes known as Russia Today, to register under a 1938 law called the Foreign Agents Registration Act (FARA).

"It should be noted that Russia Today fulfills all the demands of the [U.S.] regulators and the law -- they registered as required and so on," Putin said. "Unfortunately, the American media don't completely comply with the requirements of Russian law."

FARA does not require that every news story be prominently labeled as the product of a "foreign agent" media organization. The U.S. decision to compel RT to register came after a January 2017 U.S. intelligence finding that RT and Russia's Sputnik news agency spread disinformation as part of a Kremlin effort to undermine faith in the U.S. democracy and influence the 2016 presidential election in favor of Republican candidate and eventual winner Donald Trump.

Moscow has denied any such effort.

In Geneva, Putin expressed the "hope" that "we will manage to settle this" diplomatically.

"RFE/RL journalists are not 'foreign agents,'" Fly said. "They are patriotic Russians who are only trying to serve their fellow citizens by giving them objective news and information. The Kremlin's ongoing attacks against our journalists and other independent media outlets only serve to deprive the Russian people of their right to access uncensored information."

Russia's so-called "foreign agent" legislation was adopted in 2012 and has been modified repeatedly. It requires nongovernmental organizations that receive foreign assistance and that the government deems to be engaged in political activity to be registered, to identify themselves as "foreign agents," and to submit to audits.

Later modifications targeted foreign-funded media. In 2017, the Russian government placed RFE/RL's Russian Service on the list, along with six other RFE/RL Russian-language news services and Current Time. The Russian Service of VOA was also added to the list.

At the end of 2020, the legislation was modified to allow the Russian government to include individuals, including foreign journalists, on its "foreign agents" list and to impose restrictions on them. Several RFE/RL contributors were placed on the list in December 2020.

RFE/RL rejects the "foreign agent" designation and has refused to comply with the rules, so the agency has prepared hundreds of complaints against RFE/RL's projects. The total fines levied could run to more than $3 million.

RFE/RL has called the fines "a state-sponsored campaign of coercion and intimidation," while the U.S. State Department has described them as "intolerable." Human Rights Watch has described the foreign agent legislation as "restrictive" and intended "to demonize independent groups."

"Should the Russian government continue to move to forcibly shut down RFE/RL, we will respond," Price said, without elaborating.

While RT distributes its programs freely in the United States on cable television, RFE/RL and VOA have no access to cable television in Russia.RFE/RL once had distribution agreements with nearly 100 radio channels inside Russia, but had lost them all by 2012 following a campaign of pressure by the authorities.

RFE/RL is an editorially independent media company funded by a grant from the U.S. Congress through the U.S. Agency for Global Media. Each week, nearly 7 million people access RFE/RL's news portals in Russia.