At resort in Turkey, journalist of Ukraina TV got into scrapes with MP Herus 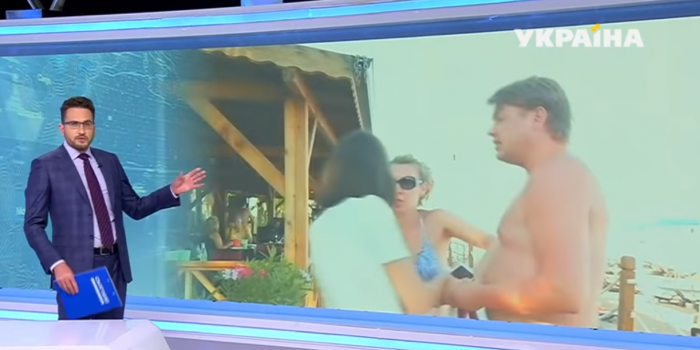 At a resort in Turkey, a conflict arose between the journalist of the news program "Today" ("Ukraina" TV channel) Dariya Smetanko and the MP Andriy Herus ("Servant of the People"), as to the story aired by the Ukraina TV, as “Detektor Media” reported.

According to the journalist, the MP took her press card and returned it only aftersation with the hotel management and the police spoke to him.

“We were at the hotel reception, we talked to the director, and Andriy Herus called the police. Earlier, we went to Turkey to see how MPs were taking holiday. We saw Andriy Herus here, observed him in the pool, how he was resting. And I asked how much did such a vacation of a MP cost, he didn't answer me, and after we approached him, he snatched my press card, ” as Smetanko said.

She added that the conflict was resolved by compromise: the MP abstained from filing compliant with the police, and the journalists would neither approach him, nor film him.

“Our conversation lasted about half an hour, the issues were settled making a compromise. He did not write any complaint to the police against us, and we had not to film him, to approach closer than 5-10 meters, that is, not to violate his privacy. We were set free, everything is fine with us, ”Darya Smetanko said in the air.

The MP Andriy Herus spoke of his version of the incident on Facebook . According to him, the journalist violated the Turkish law, which banned filming people in private hotels.

"Today, on the coast of Antalya, Turkey, I met prominent paparazzi from Akhmetov's “Ukraina 24” TV channel. The girl Dariya and her partner, heroically performing their editorial task, have been secretly photographing and videotaping me, my children and my wife for two days now. Dariya was so devoted to her work that she repeatedly violated the law, which in Turkey prohibits filming people in private hotels by journalists. As Dariya did not calm down once she got answers to her questions, the police and the hotel director joined in explaining to the girl that the laws must be obeyed, ” the MP wrote.

According to him, if he had filed a written complaint, the journalist would have been detained by the police. The MP also said that the film crew of "Segodnya" lived in a room three times more expensive than his apartment.

"If you think that this was not you, but someone also who broke the law, and that someone prevented you from making your journalistic activities, then you have immediately to call the police, we can re-conduct a face-to-face questioning, but it can have worse effect for you," Herus added.