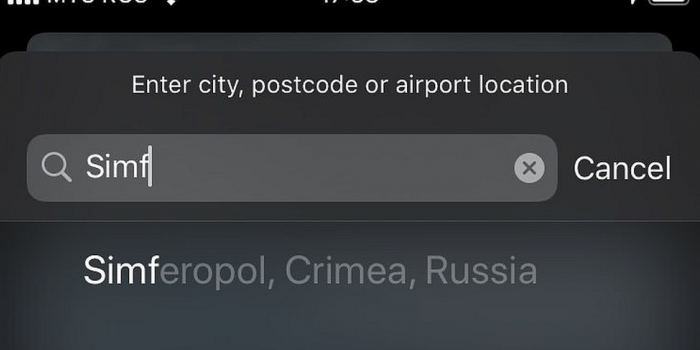 Apple is showing Ukraine's Crimea Peninsula as being part of Russia on some of its apps, a move that lawmakers in Moscow hailed as correcting an earlier "error" by the U.S. technology giant but one that is sure to anger Kyiv, as Radio Free Europe/Radio Liberty reported.

However, the display of Ukraine's Black Sea peninsula as Russian territory on Apple Maps and Weather on November 27 appeared to occur only for users in Russia.

When using the apps from the United States, Ukraine, and in parts of Europe, no international borders are shown around the peninsula.

The same neutral appearance occurs when using Google Maps, which shows the Crimean Peninsula as neither Russian nor Ukrainian.

Russia took control of Crimea in March 2014 after sending in troops, seizing key facilities, and staging a referendum dismissed as illegal by at least 100 countries.

"We make every effort to objectively depict the disputed regions, and where we have local versions of Google Maps, we follow local legislation when displaying names and borders," a Google spokesperson told Tech Crunch magazine.

Moscow also backs separatists in a war against government forces that has killed more than 13,000 people in eastern Ukraine since April 2014.

The Ukrainian Embassy in Washington told RFE/RL that it had sent a letter to Apple explaining the situation in Crimea and demanding that it correct the peninsula’s designation.

Ukraine's Foreign Minister Vadym Prystayko addressed Apple on Twitter to affirm Crimea is a Ukrainian territory: "Let me explain in your terms, Apple. Imagine you're crying out that your design and ideas, years of work and and [a] piece of your heart are stolen by your worst enemy but then somebody doesn't give a damn about your pain. That's how it feels when you call Crimea Russian land."

The U.S. State Department issued a statement on November 27 reaffirming "our unwavering support for Ukraine's sovereignty and territorial integrity," without mentioning Crimea or the mapping controversy.

Vasily Piskarev, who chairs the Russian State Duma's Committee on Security and Corruption Control, welcomed Apple's move, saying: "They have brought [their services] in line with Russian law."

"The error with displaying Crimean cities on the weather app has been eliminated," Piskarev told reporters.

"With this action, the company has demonstrated a wish to preserve and develop its positions in the Russian market," according to Leonid Levin, head of the Duma's Information Policy Committee.

California-based Apple did not immediately respond to requests for comment from RFE/RL.

It was not immediately clear when the decision was made to include Crimea as part of Russia on the apps.

The State Duma said in a statement that the change was made following a meeting between Piskarev and Apple's representative in Russia, Daria Yermolina.

Russia and Apple had been in talks over the past few months over the matter. The U.S. company initially attempted to show Crimea as undefined territory by removing any mention of Ukraine.

Earlier, the Russian Duma gave Apple a deadline of April 25, and then extended it until May 10 to "eliminate inaccuracies in displaying the geographical location of Crimea and Sevastopol in the application."

Competitor Google Maps has designated Crimea differently over the years depending on the user's location, listing it as Russian for Russian users and Ukrainian for most others.

Piskarev in June said Google had complied with Moscow's requirement that Crimea be designated to users of the Internet in Russia as Russian territory, forestalling plans to penalize the company for violating federal law.