After July 16, web resources and user interfaces must be in Ukrainian

After July 16, the language of web resources and user interfaces must be Ukrainian. This was announced by the State Language Protection Commissioner Taras Kremin.

On July 16, the Parts 2 and 6 of Article 27 of the Law of Ukraine "On Ensuring the Functioning of the Ukrainian Language as the State Language," which regulate the use of the state language on the Internet and the interface languages ​​of computer programs installed on devices that are being sold, will come into effect.

Thus, after July 16, all Internet resources (websites, social media pages, YouTube, Viber, Telegram channels, mobile applications, etc.) used as Internet representations of business entities registered in Ukraine, including informational Internet resources, must have a main Ukrainian version which should open for users in Ukraine by default. The Ukrainian version of the online representation of a foreign business that sells products in Ukraine may have less information than the main version, but it must be sufficient for a Ukrainian user to fully understand the business's purpose.

Moreover, any product on which a computer program is installed – from a car to a washing machine or electric coffee maker – must be "localized" for sale in Ukraine. The product must have a Ukrainian-language interface, regardless of whether this interface uses an electronic screen or a control panel with regular buttons.

"It should be noted that business entities that provide services to Ukrainian consumers on the Internet (online stores, online catalogs, etc.) have already been required to post information about their goods and services on relevant Internet resources in the state language since January 16, 2021. However, from now on, they are obligated to have a full version in Ukrainian, which should be the main one (contain the maximum amount of information) and open by default," said Taras Kremin.

According to him, the lack of a Ukrainian-language version of an informational Internet resource after July 16 may mean a deliberate violation of the state language law by the owner, or the lack of state registration of the media and / or its owner as a business entity.

"This, in turn, will mean the resource owner's intention to be outside the Ukrainian legal field and will cause reasonable distrust in the information published on the resource," said the Commissioner.

Also after July 16, the State Language Protection Commissioner will be able to fine officials of the government and local authorities, managers and employees of enterprises, institutions and organizations of all forms of ownership, and other individuals who violate the law. 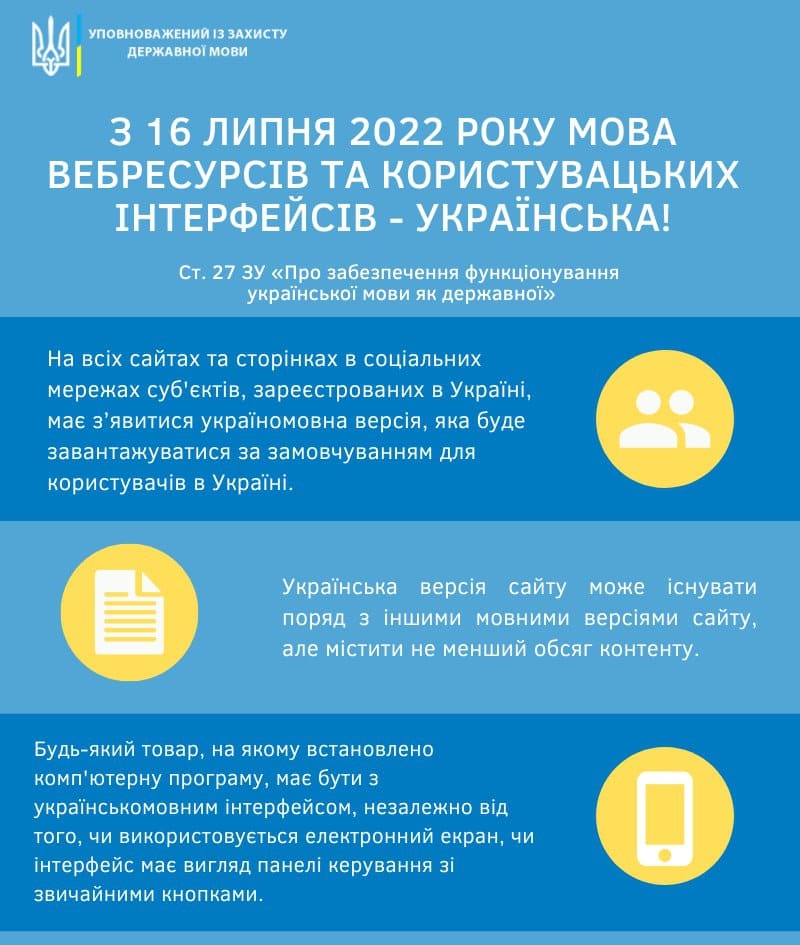 As IMI reported, on July 16, 2019, the Law “On Ensuring the Functioning of the Ukrainian Language as the State Language,” which had been passed by the Parliament on April 25, 2019, came into effect in Ukraine.