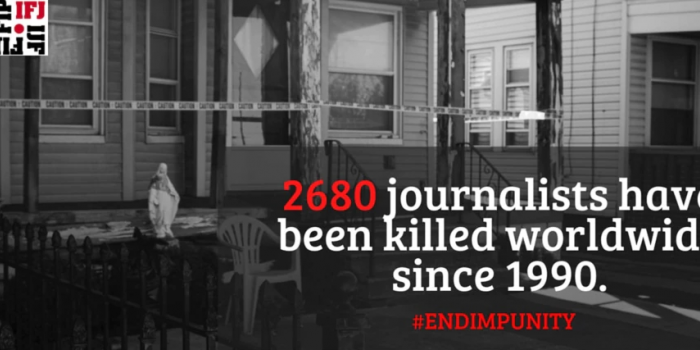 "That is 17 more killed than were in 2019 (49),  and bring the total to 2680 journalists and media workers who lost their lives to violence in the world since 1990, when the IFJ started publishing these annual reports to highlight the deepening safety crisis in the media', as the 30th annual report the International Federation of Journalists .said.

The figures published by the Federation for this year show that the number of media professionals’ killings are more or less on the same levels as in 1990s.

The report cites among the main reasons for the safety crisis in journalism the organised crime groups, extremists and sectarian violence which continue to strike terror among journalists, dozens of whom paid the ultimate price for their independent reporting in the four corners of the world.

‘’In this regard, 2020 was no exception. The ruthless reign of crime barons in Mexico, the violence of extremists in Pakistan, Afghanistan and Somalia, as well as the intolerance of hardliners in India and the Philippines have contributed to the continued bloodshed in the media", said IFJ General Secretary Anthony Bellanger. ‘’The thoughts of the IFJ and the 600.000 members of its affiliated unions go to all those victims, their families, friends and all those who are jailed, subjected to violence and harassed both physically and online.’’

The report’s 2020 ranking per country has Mexico at the top of the list for the fourth time in five years with 14 killings, followed by Afghanistan (10), Pakistan (9), India (8), Philippines (4), Syria (4) while Nigeria and Yemen recorded three killings each. There were also two killings in Iraq and Somalia. Finally, Bangladesh, Cameroon, Honduras, Paraguay, Russia and Sweden recorded one killing  each.

The report also underscores  the Federation’s commitment to pursuing its campaign against impunity by pressing governments on the need to live up to their responsibilities by investigating the murders of journalists, including through the adoption of an International Convention for the Protection and the Security of Journalists by the General Assembly of the United Nations.

For the first time, the report features a list of journalists currently behind bars for their reporting. According to IFJ records, the number of journalists in prison totals at least 229 as of March 2021.

‘’No democracy worthy of that name can jail messengers of freedom of expression. Every day, the IFJ works actively on the ground for the immediate and unconditional release of colleagues who are unjustly imprisoned‘’, added Anthony Bellanger.

The report will be officially launched at an online press conference to be jointly held on 15 March by the International Federation of Journalists and Fight Impunity, a Brussels-based organisation which advocates for ending impunity across the world.

The International Federation of Journalists