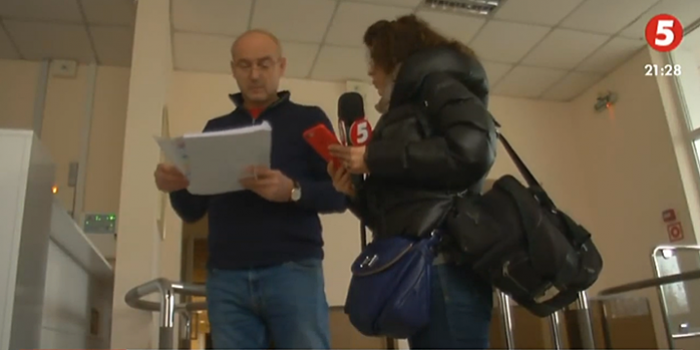 5 Kanal TV crew was not allowed to attend the meeting of the branch of the Ukrainian railway company “Intercity”, where the first stage of the competition for the supply of train services for 2020 was held, as 5 Kanal reported it on its website.

The meeting of the branch was held on November 21, but it was held behind closed doors for the press, in particular, for the 5 Kanal’s TV crew.

One of the officials, who went out to the press, without specifying his position, assured that the reason for the refusal was incorrectly stated time in the request for shooting.

However, the TV channel noted that the hour was previously agreed with the organizers in telephone mode. "When the “Interciti” official ran out of arguments, he disappeared behind the turnstile without any explanation," the story reads.

The lawyer with IMI Ali Safarov noted that denial to give journalists the access to information about a competition held by a state-owned enterprise has the features of a criminal offense under Article 171 of the Criminal Code of Ukraine “Obstruction of the Legal Professional Activity of a Journalist”.

Ali Safarov said, the branch of the Ukrainian railroad company “Intercity” is not entitled to hide information about its activity, because it has a state share in its charter.

“According to part four of Article 21 of the Law of Ukraine“ On Information ”, restricted information may not include information on the activities of state and municipal unitary enterprises, economic entities, authorized capital of which has more than 50% of shares (shares) belonging to the state or the territorial community, as well as business associations, 50 or more percent of shares (shares) of which belong to a business association, the share of the state or territorial community in which is 100%, which are subject to mandatory disclosure accoriding to the law, ”the lawyer said.