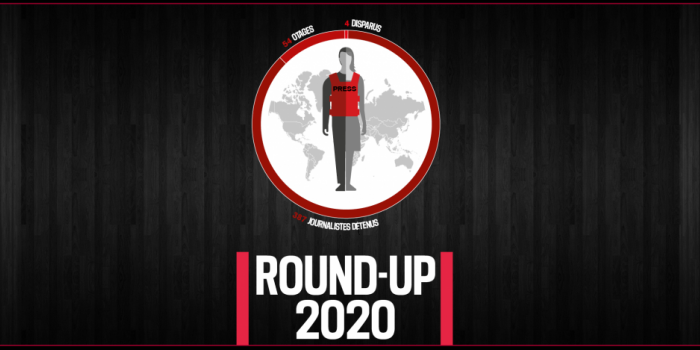 Worldwide, a total of 387 journalists are currently detained in connection with their work, 54 are held hostage and four are missing, according to the first part of the annual round-up of abusive treatment of journalists published today by Reporters Without Borders (RSF).

The total held at the end of 2020 is almost the same as last year, despite a big increase in press freedom violations and arrests linked to the coronavirus pandemic.

The number of women journalists in prison has risen by 35%, from 31 a year ago to 42 now. Most of the newly detained women journalists are held in Belarus (four), which has seen an unprecedented crackdown since last August’s disputed presidential election, and in two of the countries where the coronavirus crisis has brought a marked increase in repression – Iran (four) and China (two). They also include Vietnam’s Pham Doan Trang, one of the 2019 RSF Press Freedom Prize laureates.

According to (non-exhaustive) data gathered by RSF’s staff and Tracker 19, there was a fourfold increase in arbitrary arrests of journalists during the first three months of Covid-19’s spread around the world (March-May 2020). From the start of February to the end of November 2020, arbitrary arrests alone represented 35% of the press freedom violations logged (while physical violence and threats against journalists represented 30%). While most arrested journalists were held for just a few hours or, in some cases, a few days or weeks), 14 journalists who were arrested in connection with their coverage of the pandemic are still being held at the end of the year.

“Nearly 400 journalists are going to spend the end-of-year festivities in prison, far from their loved-ones and in conditions that often put their lives in danger,”RSF secretary-general Christophe Deloire said.

“These figures confirm the pandemic’s impact on journalism and the unacceptable fact that some journalists are paying with their freedom for seeking the truth. They also confirm that women journalists, of whom the proportion is increasing, are not being spared by the crackdown.”

It’s in Asia, the continent where Covid-19 emerged and where the most press freedom violations have been tallied in connection with the pandemic, that the most coronavirus detainees are located: seven in China, two in Bangladesh and one in Myanmar. In the Middle East, where several countries have taken advantage of the coronavirus pandemic to step up control over the media and news reporting, three journalists are still being held for articles linked to the pandemic: two in Iran and one in Jordan. In Africa, one journalist is still held in Rwanda – on a charge of “violating lockdown regulations.”

According to the 2020 annual round-up, at least 54 journalists are currently held hostage worldwide, 5% fewer than this time last year. Following the release of a Ukrainian journalist held by pro-Russian separatists in eastern Ukraine’s Donbass region, Syria, Iraq and Yemen are the only countries where journalists are still held hostage. They include four journalists held by the Houthis in Yemen since 2015 who were sentenced to death in April and, since then, have been left wondering if and when these sentences will be carried out.

RSF will publish its Annual Report on Journalists Killed in 2020 on December 29.

Compiled by RSF every year since 1995, the annual round-up of abusive treatment of journalists is based on precise data collected throughout the year. We gather detailed information that allows us to affirm with certainty or a great deal of confidence that the detention, abduction or disappearance of each journalist was a direct result of their journalistic work.