2 Ukrainian journalists received "Courage in Journalism" Award in US 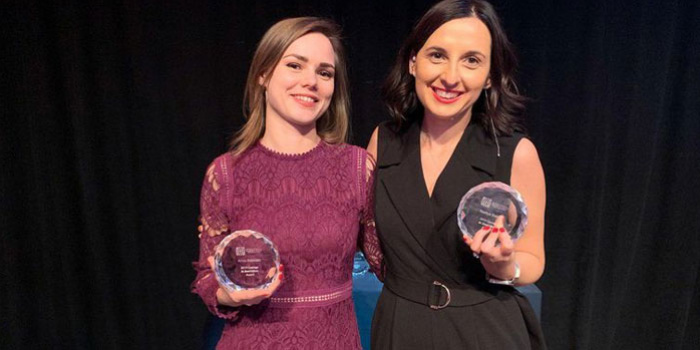 Hromadske's Nastya Stanko has received a "For Courage in Journalism" award in Washington, United States. Along with a former Hromadske journalist Anna Babinets, Stanko was recognized by the International Women’s Media Foundation (IWMF) this summer,as Hromadske reported.

While receiving the award, Stanko – who is known for her honest, unbiased coverage of the Russian-Ukrainian war – highlighted the difficulties of being a female journalist in a country at war.

"Sometimes we (female journalists -ed.) are seen as crazy or too emotional. When women speak about peace, it means we are weak."

Stanko also spoke out about the criticism she receives in Ukraine for portraying the war as more multicolored than just a "black-and-white" event.

"Because they don't like what I say I'm a target. I received comments on my appearance, there are threats" Stanko said.

Stanko – who is one of the co-founders of Hromadske, an independent Ukrainian media organization launched at the start of the Euromaidan protests in 2013 – said that while she can't say for certain that she will be doing journalism all her life, there's at least one thing gives her courage to keep going.

"Three months ago, an innocent man was released from prison after [the publishing of] one of my stories," she said. "And I understood that this is my job. To help people and to believe that every story was not told in vain."

Stanko, who has been working as a journalist for over a decade, mostly covered the war in the Donbas that since its start in 2014 killed more than 13,000 people. These days, she concentrates more on producing documentaries. Her latest documentary told the story of Serhiy Litvinov, a 32-year-old cowherd who was jailed by Russia on fictitious charges. By unexplained sequence of events, Litvinov was released from Russian prison and sent to serve the rest of his term in a colony in Kharkiv, eastern Ukraine. After Stanko first broke the story in July, Litvinov was released.

Anna Babinets, a co-founder of investigative agency Slidsto.info that used to be part of Hromadske, did a series of reports on Mezhyhirya, a luxurious estate that belonged to ousted Ukrainian president Viktor Yanukovych. Babinets also co-authored an insightful investigation into the 2016 murder of Ukrainian-Belarusian journalist Pavel Sheremet.