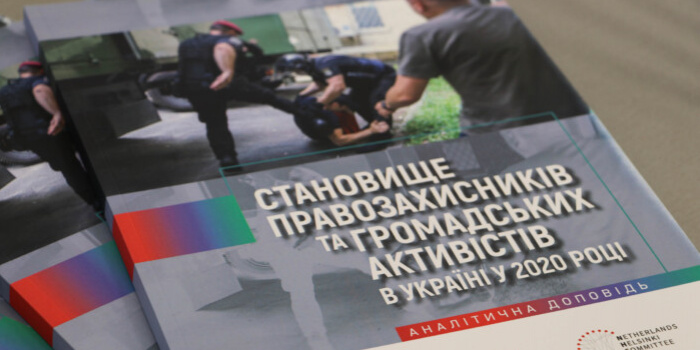 In 2020, human rights defenders recorded 101 cases of attacks and incidents of persecution of civil society activists in Ukraine. Fight against corruption, protection of the rights of LGBTQ people and environmental protection were the most dangerous types of activism, as ZMINA reported citing its annual report on persecution of civil society activists and human rights defenders in 2020 during a press conference in Kyiv.

The most common documented incidents were attempts to intimidate activists (22), physical assaults (21) destruction of or damage to their property (18). In only four of the 21 incidents, suspected attackers were served with the notices of charges, .

The authors of the report note that despite coronavirus quarantine restrictions across the country, there were no fewer cases of persecution in 2020. Moreover, during this period, researchers recorded abuse of attempts to held activists administratively liable for peaceful assemblies, though most of those protocols were revoked by the courts.

Activists are also often subjected to legal prosecution and defamation campaigns are launched against them, with ten and nine such incidents in 2020, respectively.

An incident of pressure on activists defending the rights of LGBTQ people occurred in Odesa in September last year. There, supporters of the right-wing radical organization “Tradition and Order” repeatedly hung propaganda posters at the entrance to the Queer home Odesa community centre, clogged with matches the keyhole in the door and glued it, and so on. This series of incidents continued further in October 2020 due to police inaction.

The organisation considers it an attempt to intimidate activists. The head of the centre, Anna Leonova, says that she appealed to Odesa police several times with relevant statements, but they neither initiated criminal proceedings nor drew up reports on administrative offences.

Environmental protection is one of the most dangerous types of public activity. In December last year, unknown people twice set fire to a hayloft at the stable “Shcherbati Tsuhli” in the village of Prybirsk in Kyiv region, where a group of enthusiasts is trying to restore the almost extinct breed of Polissya horses.

Human rights activists also mentioned 12 bills that were registered in the Verkhovna Rada in 2020. If these bills are passed, they will pose a threat to the freedom of association and peaceful assembly, provoke discrimination against human rights defenders and civil society activists and promote spread of homophobic ideas. Moreover, according to ZMINA legal analyst Olena Vynohradova, each of the bills could become a flagrant violation of international human rights standards and Ukraine’s commitments to the international community.

“At least a third of these bills are patterned after the ideas of our northern neighbor, the aggressor country, which not only fills the information space of Ukraine with its propaganda, but also tries to cram its toxic ideas into our legislation. That is why it is extremely important to talk about such bills so that the society understands their danger and is aware of the consequences of their adoption,” Vynohradova added.