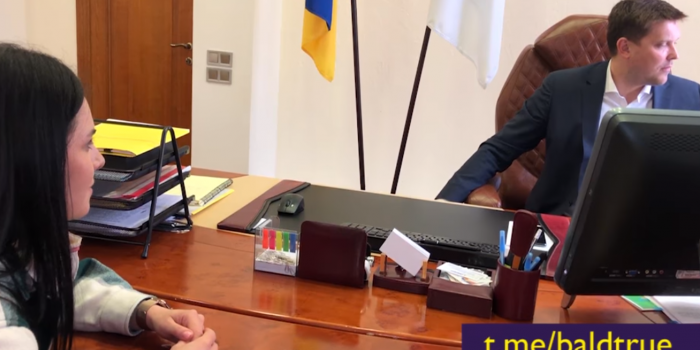 The head of the Odessa regional state administration, Maksym Kutsiy, ordered the National Guard to expel the TV crew of “Secretni Materialy” program, just after a question asked by journalist about a tender for purchasing ambulance cars. This was reported by Detector Media with reference to 1 + 1 TV channel’s press service.

Journalists of the "Secret Materials" program Yevheniy Kuksin and Yulia Chervonenko were to film a story exposing corruption schemes surrounding the purchase of ambulances by the Odessa Regional State Administration. They had to record a comment with Maxim Kutsy.

Eugene Kuksin released the video of the incident. The head of the Odessa Regional State Administration called the journalist's question "provocative" and his office a "restricted area facility." He asked the cameraman to stop filming and to delete the record, then tried to pick up the camera. “I forbid you to film me now and please delete this record. You ask provocative questions. Please stop recording. I will call the National Guard now, "Kutsiy said.

The editorial board of “Secretni Materialy” is going to lodge a complaint to law enforcement agencies for obstruction of lawful professional activity of journalists (Article 171 of the Criminal Code).

The story about corruption schemes in the Odessa Regional State Administration will be released in the program "Secretni Materialy" on the TV channel "1 + 1" on May 13, at 7:00 pm.

“The incident happened just after the weekly briefing, at which the leadership of the regional state administration reports on its work, answers questions from mass media. The TV crew introduced themselves as journalists of one of the TV channels who wanted to record a comment on another topic. Showed press cards. As I found out later, they really are employees of this TV channel. However, the video was released on a third-party telegram channel after a few days of media attacks on anonymous resources, ”Denis Sokolov said.

According to him, the TV crew asked to clarify several questions on Covid-19, and later began to ask provocative questions. “I don't know what question was asked precisely before Maxim Kutsy's answer. I was not present at that moment, "Denis Sokolov said.